Linux 5.6 Will Likely Have USB 4 Support

Greg Kroah-Hartman, Linus Torvalds second in command, has merged code from Intel with USB 4 support into the Linux kernels linux-next.git tree. It is therefore highly likely that Linux 5.6 will support USB 4 devices with features like DisplayPort tunnelling, PCIe tunnelling and P2P networking. Only Intel and Apple host devices are supported by the current patches. 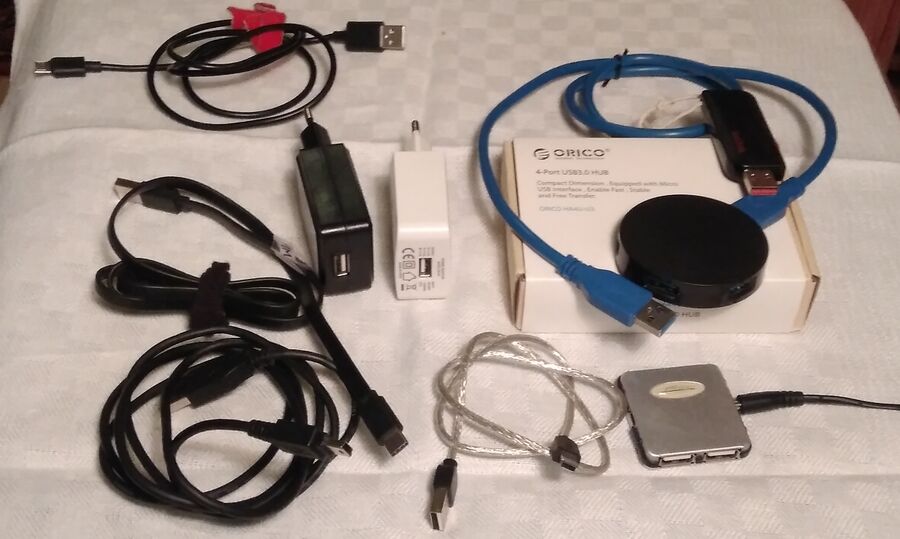 Deprecated: None of these USB cables, hubs or chargers are compatible with USB 4.

Greg Kroah-Hartman pulled support for USB 4 into linux-next.git in a commit on December 17th with documentation and additional fixes pulled December 20th, 2019. Code from linux-next is pulled into the mainline kernel as a matter of routine so it is very likely that Linux 5.6 will have USB 4 support.

The commit message on the patch initially adding USB 4 support to linux-next.git explains USB 4 as:

"USB4 is the public specification based on Thunderbolt 3 protocol. There are some differences in register layouts and flows. In addition to PCIe and DP tunneling, USB4 supports tunneling of USB 3.x. USB4 is also backward compatible with Thunderbolt 3 (and older generations but the spec only talks about 3rd generation). USB4 compliant devices can be identified by checking USB4 version field in router configuration space.

This patch adds initial support for USB4 compliant hosts and devices which enables following features provided by the existing functionality in the driver:

This brings the USB4 support to the same level that we already have for Thunderbolt 1, 2 and 3 devices."

The new documentation for USB4 and Thunderbolt adds some additional details:

USB 1, 2 and 3 were created by a joint industry effort. USB 4 is nothing more than Intel's Thunderbolt 3 standard re-named. The following change to drivers/Makefile makes that very apparent:

so does this change to drivers/net/Kconfig:

Get Ready To Replace Your Cables

USB 4 will require using a USB type C to USB type C cable, or, as drivers/net/Kconfig currently says, "a USB4 and Thunderbolt cables'". Every single cable you have which is not a "Thunderbolt" USB type C to Type C cable is deprecated. The USB 4 specification mandates that hosts (computer controllers, hubs) support USB 2, 3 and 4. USB 4 devices have to support USB 2 but they do not have to support USB 3. That does not mean that computers made in the future will have the good old Type A connector - which means that there will probably be a thriving market for things like USB Type C to Micro B and USB Type C to Type B SuperSpeed cables. It is interesting that a "standard" has, over time, ended up with 10 different connectors.

USB 4 aka Thunderbolt 3 supports transfer speeds up to 40 Gbit/s (5 GB/s). This allows USB 4 to be used for things like external GPUs since 4 lanes of PCIe 3.0 can be sent over a single USB 4 connection. It also makes it possible to tunnel DisplayPort signals over a USB cable in order to drive displays.

There is no support for devices from AMD, Huawei or other competing technology companies in any of the USB 4-related linux-next.git commits.

Linux 5.6 is far away from a stable release. Linux 5.5 is currently on its third release-candidate. Best guesstimate based on the kernel's typical release-cycle places a Linux 5.6 release in March 2020. It will likely have the USB 4 patches - unless Linus Torvalds decides to put his foot down for some currently not apparent reason.