Intel may be closer to launching 10nm Ice Lake CPUs for desktops and servers than one might think. A close-up inspection of intel-family.h reveals that definitions for three new Intel CPU families were added to Linux 5.2 rc5: Xeon D, Desktop and "X". There is still no actual code depending on these chips being present or not. 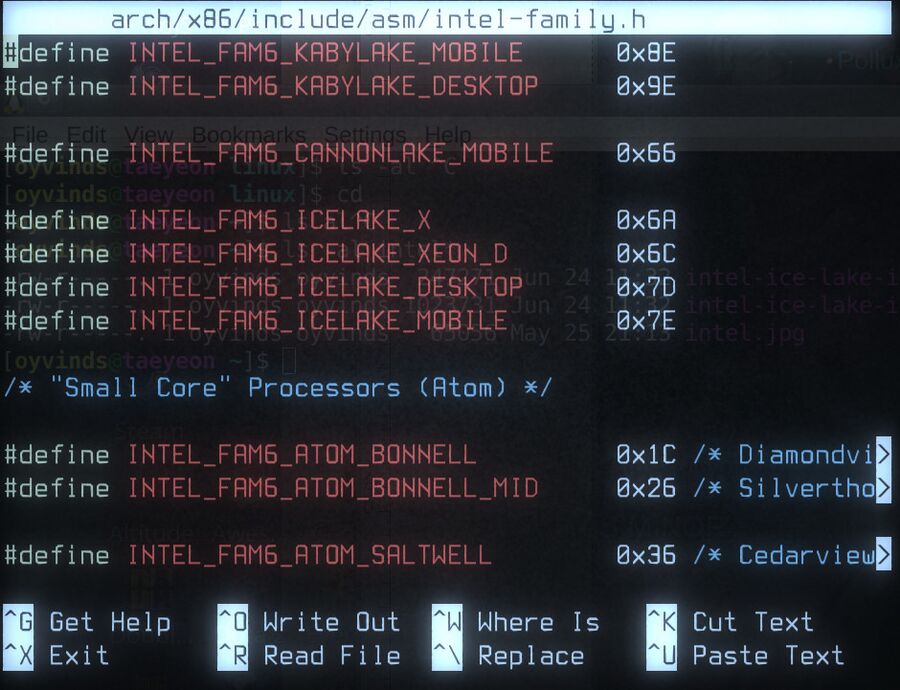 Support for Ice Lake mobile (INTEL_FAM6_ICELAKE_MOBILE) has been present in intel-family.h for quite some time, it is present in current 5.1-series kernels. Three new CPUs were added to Linux 5.2-rc5 and we did not notice at the time. Toying around with grep on git master revealed that the Ice Lake CPUs present in arch/x86/include/asm/intel-family.h in git master are as of now:

All but INTEL_FAM6_ICELAKE_MOBILE were new to 5.2-rc5. The X parts have so far referred to eXtreme edition Xeon parts (EP and EX Xeons).

The iGPU graphics support for Ice Lake was tagged "stable" earlier in the 5.2 release cycle.

There is currently no actual code specific to these new CPU definitions. There are several files with code taking different paths depdnding on INTEL_FAM6_ICELAKE_MOBILE being defined or not such as arch/x86/events/intel/ files core.c, cstate.c, rapl.c and uncore.c as well as tools/power/x86/turbostat/turbostat.c. No current git kernel code cares about other INTEL_FAM6_ICELAKE chips, not even a little. Actual code depending on these CPUs being present will likely appear in the near future.

Our best educated guess is that mobile Ice Lake chips will appear in consumer products in November and desktop parts will follow early next year. Competition from AMD may compel the worlds biggest chip maker to launch earlier than they'd like.