The Mozilla Corporation has released yet another Firefox version because they are on a monthly release schedule and it's that time of the month again. Firefox 81 adds media controls using the standard MPRIS interface which means things like the KDE media player controls can now be used to control video playback in Firefox. There's also a new bundled theme and 6 security fixes. 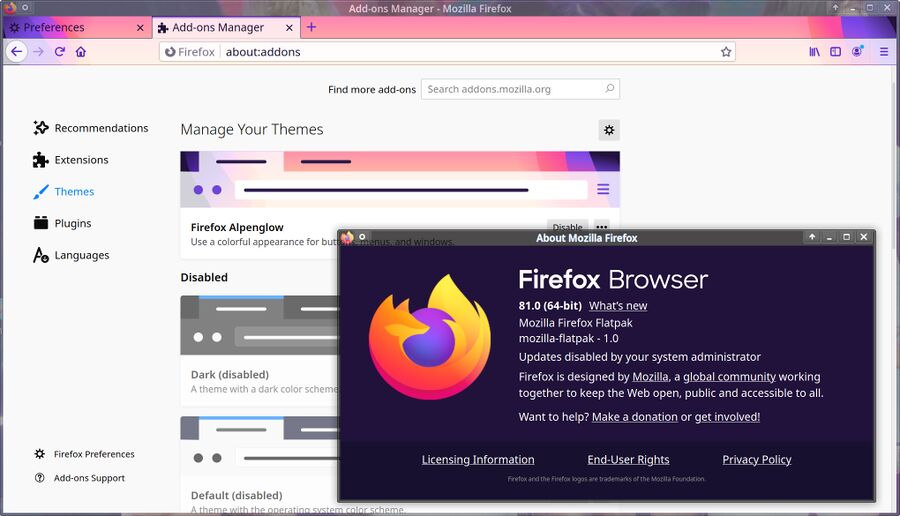 Firefox 81 with a new "Alpenglow" theme.

The Mozilla Corporation released two new Firefox versions today: A standard version 81 release and a new 78.3.0 long-term support version. They declared that the old 68.x long term support branch is discontinued as of this release.

Better media controls is the highlight in this release. Those general stop and play buttons you may or may have noticed in various desktop environments that magically get controls for whatever desktop application happens to be playing audio or video are, on Linux, magic that happens using the MPRIS D-Bus Interface Specification. Firefox 81 has gained support for this specification which means that it can now tell the desktop environment that it is playing multimedia and make player controls appear in things like the KDE Plasma media control applet. Windows and macOS get similar functionality on those operating systems.

Mozilla Firefox 81 includes one more default theme as of this release: "Alpenglow". The Mozilla Corporation calls it "a colorful appearance for buttons, menus, and windows".

Mozilla Firefox 81 has a new credit card autofill feature that lets Americans and Canadians store their credit card information in Firefox and have it magically be submitted to stores when they request it. The CVV number is not saved (as a precaution). This feature is restricted to Canada and the USA.

Europeans need not feel like they are missing out. There's a new "Pocket recommendation" feature just for users in Austria, Belgium and Switzerland who use the German Firefox version. Everyone, in Europe or not, can and should type about:config into the address bar and search for extensions.pocket.enabled and disable that Marxist propaganda fountain.

All the "high" impact issues have to do with memory corruption which could, if exploited correctly over time, be used to make Mozilla Firefox crash. The "moderate" issues are:

The "moderate" CVE-2020-15677: Download origin spoofing via redirect is a bit interesting. You can make Firefox <81 display site A as the source of a file if site A links to a file at site B. There's not much you can do in terms of practical attacks since you can service files off A if you control A anyway, but it's an odd one. 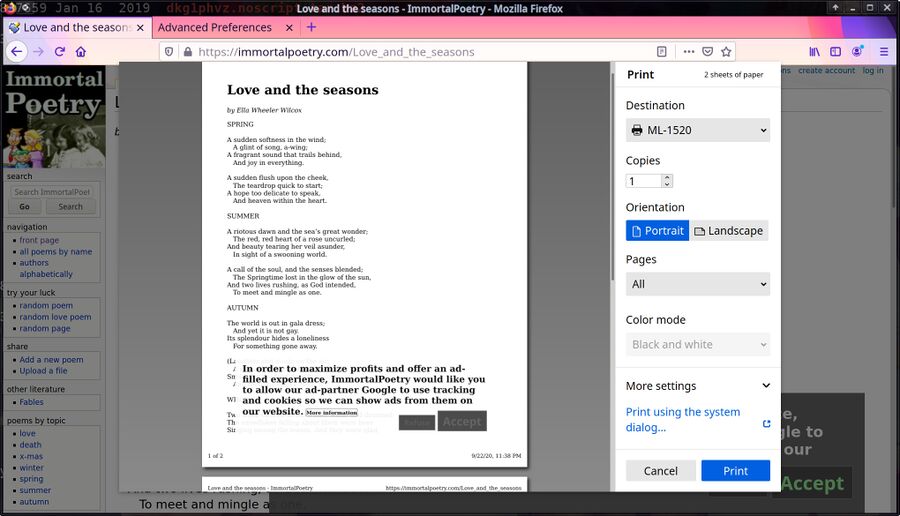 The new, but deactivated by default, print preview interface in Firefox 81.

Mozilla Firefox 81 has a brand new print preview which is scheduled to be a "official" feature in a later release. The trick to getting it right now is to type about:config into the address bar and print.tab_modal.enabled into the search bar. It's not revolutionary, but it's fine and you get to see how the page will look when you print it if you click More settings and disable or enable things like Print headers and footers.

Mozilla Firefox 81 is available has a Flatpak from Flathub in case you don't want to wait until your favorite Linux distribution makes packages available. There's also a "Download Firefox" button at mozilla.org/en-US/firefox/new/" which doesn't in work in my Firefox on Linux, it just shows a pop-up claiming "You’ve already got the browser. Now get even more from Firefox". Perhaps Ublock Origin or some setting is confusing Mozilla's website. The download link may or may not work on Windows and macOS.