Technology leader China has the most supercomputers with a total of 228 systems on the Top 500 SuperComputer list as of November 18th, 2019. All of the top ten most powerful machines are running a Linux variant. 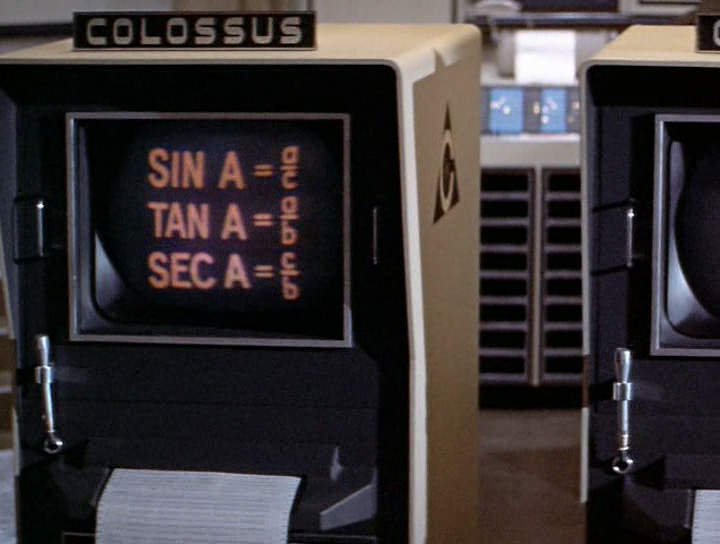 A powerful supercomputer depicted in the movie "Colossus - The Forbin Project". It did, of course, become self-aware and hell-bent on taking over and controlling the world.

The middle kingdom has the by far most supercomputers of all. 228 of the top 500 systems in the world are located within it's borders. However, the Chinese lose face to the Americans when measuring of raw computational power. The United States currently holds 5 of the top 10 positions on the Top 500 SuperComputer List and they are #1 in terms of computing power. They have fewer systems than the Chinese but the systems they do have are far more powerful.

The Worlds Most POWERful Computer

The most powerful computer system in the world is the "Summit" at Oak Ridge National Laboratory USA. It was built by IBM using their 22-core POWER9 central processing units. It has a total of 2,414,592 cores and 2,801,664 GB of memory and it users dual-rail Infiniband from NVidia's Israeli subsidiary Mellanox for interconnectivity. It's Theoretical Peak ("Rpeak") is 200,794.9 TFlop/s. It runs the Red Hat Enterprise Linux (RHEL) 7.4 operating system from IBM's subsidiary Red Hat.

The worlds second most powerful system is the Sierra. It is, like the Summit, built by IBM using their 22 core POWER9 CPUs. It is essentially a smaller "Summit" machine with a million less cores (1,572,480 total) and slightly less than half the RAM (1,382,400 GB total). It's Theoretical Peak ("Rpeak") is 125,712 TFlop/s. It is also running the Red Hat Enterprise Linux operating system.

China has both the worlds third and fourth most powerful supercomputers. The Sunway TaihuLight, at #3, is running 260-core Sunway SW26010 CPUs at 1.45 GHz. It has a total of 40,960 of these Chinese-designed 64-bit RISC processors which brings it's total core-count to 10,649,600 cores. Those, combined with an impressive 1,310,720 GB of memory, places it's Theoretical Peak ("Rpeak") performance at 125,436 TFlop/s. That's very close to the American Sierra supercomputer but it is far behind the #1 Summit system. The system does have the worlds highest core-count with over four times as many cores as the Summit - but the much weaker cores means that it's raw performance is lower. The Chinese are running a custom home-grown Linux variant called Sunway RaiseOS 2.0.5 on this system. The machine was built by the National Supercomputing Center in the Wuxi province.

The forth most powerful supercomputer is also operated by the Chinese but it was not built using entirely Chinese technology. The Tianhe-2A is running American Intel Xeon E5-2692v2 12 core CPUs at 2.2GHz. It has a total of 4,981,760 cores and 2,277,376 GB of memory. It's Theoretical Peak ("Rpeak") is ) 100,679 TFlop/s. It runs the Kylin Linux operating system compiled using Intel's ICC compiler.

All The Top 10 SuperComputers Are Running A Linux Variant

The American's hold the 5th position with the Dell-built Frontera system in Texas. It runs the poor-mans RHEL-variant CentOS Linux 7.

The Europeans are all the way down at the 6th position with the Piz Daint in Switzerland. They do not process the technology to build a supercomputer themselves so they had one delivered to them by the Americans through Hawlett Packard Enterprise's subsidiary Cray. It uses the Cray Linux operating system.

All the other top 10 systems on the top500 supercomputer list are using a Linux-based operating system. Most are either running RHEL or CentOS or Cray Linux. The Germans, who have the worlds 9th most powerful computer system, are of course using the Swedish-owned German-based SUSE Linux Enterprise Server 12 SP3 operating system.

You can find the entire Top500 SuperComputer list as of November 2019 at top500.org. It is updated semi-regularly and it has so far been published 53 times since it's inception in 1993.

My mistake, very sorry. It is (should be) fixed.
Permalink
Latest News Headlines See the more archive for news stories
Retrieved from "https://linuxreviews.org/w/index.php?title=China_Is_Number_1_In_Number_Of_SuperComputers_And_All_The_Top_10_Systems_Run_Linux&oldid=11280"
Categories: