The latest Bitcoin Core wallet for the Bitcoin network and BTC currency on it contains speedy trial activation code for a technology called Taproot that aims to make different kinds of Bitcoin transactions look mostly the same. Taproot requires a "soft fork" which will take place at block 709632 if enough Bitcoin miners adopt this or other versions signaling Taproot activation.

The Bitcoin Core wallet (git as of 2021-05-02) synchronizing with the Bitcoin network. Nevermind the minor graphical glitches due to the Qt interface seemingly hanging with redraws every 5 minutes, it's probably just the Qt interface being on the same thread as disk I/O or something like that.

Bitcoin Core is the de-facto Bitcoin reference implementation with roots going back to the original Bitcoin wallet by "Satoshi Nakamoto". It is an ideal Bitcoin wallet for everyone who wants to wait two weeks for a digital currency wallet to sync so they can pay $25-60 in "network fees" to send digital BTC currency that will arrive after one to two hours, or 6 "blocks".

The big highlight in Bitcoin Core 0.21.1 is the "Speedy Trial" activation of a technology called Taproot that will lead to a "soft fork" of the Bitcoin network at block 709632 if a majority of the "decentralized" Bitcoin miners located in a single province in China adopt the new version.

Taproot is, without going into any technical details, a improvement that makes single-signature scripts, multisignature scripts, and complex scripted contracts on the Bitcoin network look like any other Bitcoin transaction on the blockchain. Complex Bitcoin transactions are currently standing out as a sore thumb, and they have even higher fees than the laughably high single-transaction fees. That's what Taproot will solve if the Bitcoin miners, not the Bitcoin users, choose to adopt it. The 0.21.1 Release Notes as sent out on the bitcoin-core-dev mailing list proudly state that:

"If activated, these improvements will allow users of single-signature scripts, multisignature scripts, and complex contracts to all use identical-appearing commitments that enhance their privacy and the fungibility of all bitcoins. Spenders will enjoy lower fees and the ability to resolve many multisig scripts and complex contracts with the same efficiency, low fees, and large anonymity set as single-sig users."

The "low" per-transaction fees the Bitcoin payment network has to offer are currently in the $25-60 range. 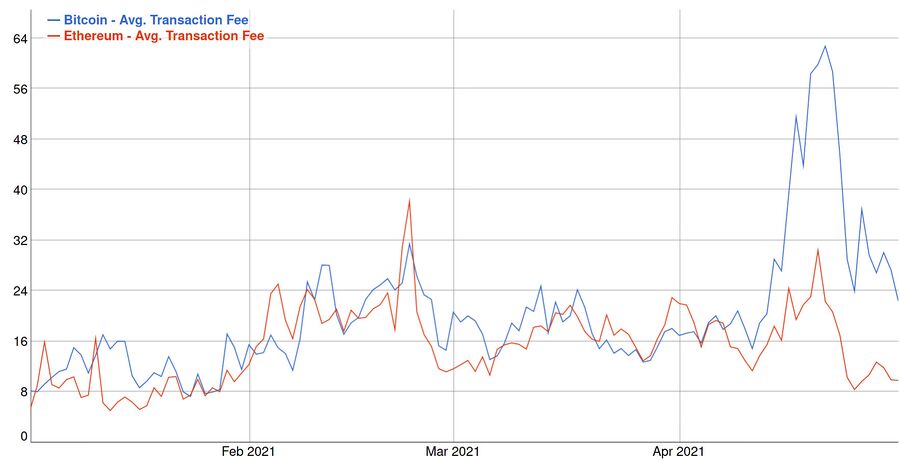 Bitcoin and Ethereum transaction fees between January and May 2021. Source: bitinfocharts.com

Taproot will not address the insanely high fees that make the Bitcoin payment network and the BTC currency on it practically useless for anything but million-dollar transactions, it will just make complex transactions as "cheap", or expensive, as other transactions.

You can read more about the technical details about Taproot in the technical documents BIP341 Taproot: SegWit version 1 spending rules, BIP342 Validation of Taproot scripts and BIP340 Schnorr signatures for secp256k1 if you are particularly interested.

The Bitcoin Core 0.21.1 wallet, which is available for Linux, macOS 10.12+ and Windows 7 and newer, can be acquired from bitcoincore.org/bin/bitcoin-core-0.21.1/. It is currently not available on the GitHub Bitcoin Core releases page. Perhaps they forgot to make it available there, or perhaps they sent the release-announcement out on the bitcoin-core-dev mailing list a bit earlier than they planned.

The light-weight Electrum Bitcoin Wallet is a much better choice for regular non-miner end users who want to send or receive BTC. Bitcoin transactions will cost a ridiculous amount regardless of what wallet you choose, but you won't have to leave a computer on, synchronizing with the Bitcoin network, for weeks before you can use the the more light-weight non-validating wallets like the Electrum wallet. The Bitcoin Core wallet is more suited towards specialized use-cases like running full Bitcoin nodes, mining operations and things like that.

8 months ago
Score -1
Bitcoin will undo building 7 of the WTC attacks. The Jews cannot demo this building from space.