A "mostly peaceful" BLM protestor in Minneapolis on May 29th, 2020.

The violent Marxist terrorist organization Black Lives Matter has been out of the big legacy news outlets for some time. You may therefore wonder why IBM, their subsidiary RedHat and The Linux Foundation are now launching an initiative called "Call for Code for Racial Justice" at this time. Their website has this very informative answer:

"In response to the murders of George Floyd, Ahmaud Arbery, Breonna Taylor, and too many others, Black IBMers, in their pain, frustration, and exhaustion, had a moment of clarity. They had a vision of a world without social injustice – a vision of using technology to combat systemic racism."

Call for Code for Racial Justice

George Floyd was a drug-addict with a history of pointing guns at pregnant women's bellies. He died in police custody with COVID19, fentanyl intoxication after methamphetamine use on May 25th, 2020. He stated that he could not breathe several times while a policeman causally sat on him with his knee kn his neck. Breonna Taylor was killed in a police raid targeting several homes used by hder boyfriend Jamarcus as a part of his drug operation since she happened to be in charge of handling the cash money side of his enterprise. Ahmaud Arbery is the only one of the three IBM praises who wasn't a hardened criminal, he was killed for jogging while being black.

"TakeTwo" will crawl and analyze "news articles, headlines, web pages, blogs, and even code" in order to find through-crime such as not using "language recommendations" such as "inclusive terms". IBM has already begun using this surveillance system to monitor what their employees write and they provide API access for other organizations who would like to monitor their employees to ensure that they don't engage in wrong-think.

"Fair Change" is a more voluntary real-world surveillance system consisting of a mobile application and a back-end database. The idea is to have people record traffic stops and "other scenarios" with the potential for "racial injustice" and "systemic racism". The system includes a map where recorded incidents can be seen. The API for capturing data is made using NodeJS. 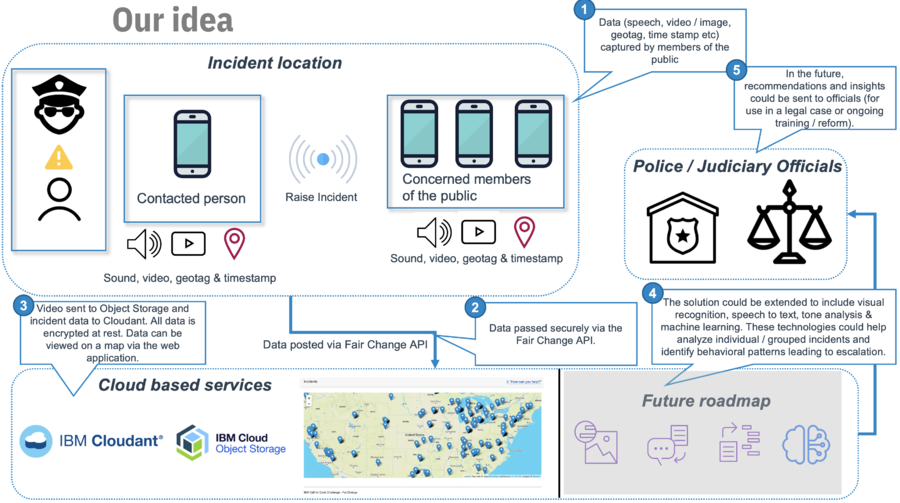 The goal of the "Fair Change" system is to "enable transparency, reeducation and reform". IBM plans to add features like "visual recognition" and "tone analysis" to future versions in order to ensure that public servants using the wrong tone get flagged for reeducation.

IBM and the Linux Foundation plan to create five other initiatives in the near future. These are:

IBM and the Linux Foundation are asking developers and "ecosystem partners" to contribute to these projects by "adding their own diverse perspectives and expertise".

You can learn more about these wonderful new initiatives at developer.ibm.com/callforcode/racial-justice/ and linuxfoundation.org/projects/call-for-code/.