Pitivi is a free software video editing program for GNU/Linux desktops which is closely tied to the GNOME desktop environment. It can be used in Xfce and KDE Plasma too as long as you have the GNOME libraries. Pitivi is designed to be strait-forward and easy to use and in some areas it is, in others it's absolutely not. Feature-wise it's got a wide range of effects to choose from and it has more than kdenlive. However, there are some really basic features missing which makes Pitivi kind of a non-starter for all but the most basic video editing jobs. And there's bugs which it a poor choice even in those cases.

Pitivi is written in Python and it uses "GStreamer Editing Services" as a back-end for many of it's functions. 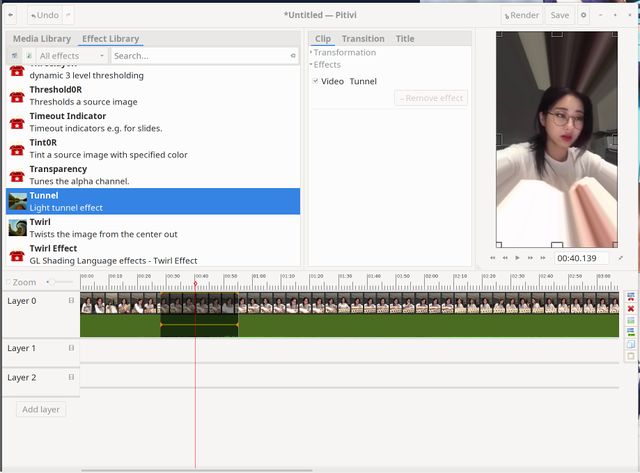 Pitivi has a timeline with layers and you can have many. You add clips to your "Media library", drag the clips you want from there to one of the layers on the timeline and optionally add one or more effects from the "Effect library". Clips can be split and moved and changed with effects once they are on the timeline. Transitions between clips are easily made by simply overlapping two clips in the same layer on the timeline.

Each layers are not divided into a separated audio and video track. Clips do look divided into audio and video on the timeline but they are not. The audio area has a line you can use to gradually adjust the volume of a clip down. It can't be adjusted above a clips original volume, there is no audio gain function. There is no other audio effects for that matter.

Video effects can be added by simply dragging an effect onto a clip in the timeline. Some work well, others will make the timeline really sluggish and playback choppy. A look at CPU usage when browsing the timeline over a clip with one or more problematic effects shows why: Pitivi likes loading one core at 100% while the rest sit idly by. Having a machine with many cores will not help, your only option is to get a 10 GHz CPU if or when they invent one.

The amount of video effects available in Pitivi is quite large and there are some unique ones. This variety of effects could become a competitive advantage in the free software video editing space.

One detail when it comes to effects: Using any GL-based effect will just crash Pitivi. So don't. The upcoming 1.0 release expected late May 2019 will not include GL effects for this reason. Related code will be re-worked and GL effects will perhaps be put back in before version 2.0 is released. Just avoid them for now if your version of Pitivi has GL effects enabled; they aren't usable.

Rendering a video is strait forward if it works though the output formats are severely lacking. You can output to VP8, Theora and x264. No VP8, no HEVC, no nothing beyond those 3 choices. Once you start rendering you may find that Pitivi crunches numbers for a while and produces a result. You are almost just as likely to find it sitting there, doing nothing, hours later with a message in the terminal - if you started it from one - saying

Video output is fine when it does render. As for that specific rendering error output, that particular problem will be fixed soon or eventually.

Pitivi has a lot of potential. It is a bit lacking and it is quite buggy. You can do the most basic editing jobs with it but even then you're likely to run into some bugs. Overall, kdenlive is a better choice for now.