PilferShush Jammer is a completely useless and, from a security perspective, dangerous application that claims to be able to prevent other applications on an Android device from using the microphone. It doesn't. It does absolutely nothing in that regard.

PilferShush Jammer can also emit a "jamming sound" in the near Ultra High Frequency range 18 kHz and 24 kHz in order to prevent application listening for audio triggers that range from working. The volume it emits it's somewhat annoying "clicking sound" at will probably not jam anything.

The application starts with a simple two-button display followed by some informative text. There's one button for enabling "Passive" jamming. This is supposed to prevent other applications from using the microphone. It doesn't. There's three tabs available: HOME, INSPECTOR and SETTINGS.

The SETTINGS has an option to enable "buffer read lock" on the microphone. Enabling this setting does not make the audio recording jamming feature work. It does make some bars show up in programs recording audio. Those go away the moment you speak. 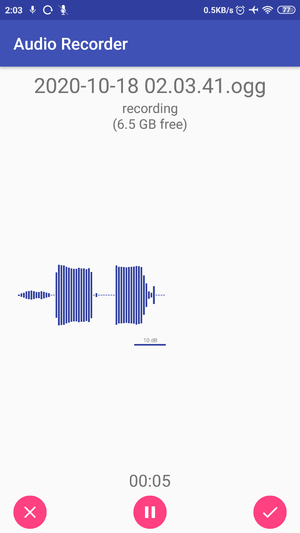 The "Audio Recorder" application from F-Droid with "buffer read lock" (not really) enabled: 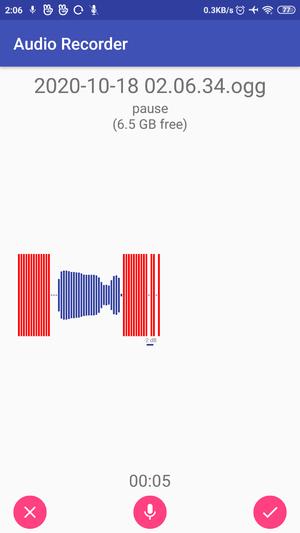 Everything you say into the microphone is recorded by Audio Recorder in either case. The same is true with the phones built-in audio recorder application. We tested recording with a third party app after finding that it doesn't block the phones audio recorder program was to see if there would be a difference, there isn't.

The "audio jammer" functionality does work, the phone starts emitting a very low volume click click sound from the speaker. It seems unlikely that it's loud enough to block anything.

PilferShush Jammer does have one feature that seems to work: It can scan installed applications and check if they use any known audio recording software development kits. It didn't find any on our test-phone, but it did scan. We can't definitively say that this works since it found nothing, but it appears as if this feature does what it is supposed to.

PilferShush Jammer is one of several programs that are outright dangerous not because they contain malicious code; it's dangerous because it claims to provide a security feature when it doesn't.

You should absolutely not use PilferShush Jammer and think you gained any kind of security, you won't. You'll get a false sense of security unless you actually test it and check if does or doesn't work as advertised. It may do what it claim on your phone though there's a fair chance it doesn't.

The reasons this utterly disappointing non-functional application exists is more interesting than the application itself.

The author has a blog at www.cityfreqs.com.au/pilfer.php with a lot of research into Android applications using hidden audio recording in various ways. It lists a wide range of Android SDKs that let app developers add such functionality to their apps.

You should be cautious and not say libelous things. It could harm this website or get you sued personally.

I suggest removing this ASAP. You don't want a suopena in the mail do you ?

PilferShush Jammer did not jam audio recording on the two phones I tested it on when I tested it. You clearly can't just install it and assume it works on some random phone. There's a fair chance it will do nothing beyond providing some false sense of security and there's a 100% chance of that with the hardware I tested it on.

Feel free to send suopena spam in the mail if you feel like wasting your time because you don't like that I actually test the software I write about and honestly share my findings.

I'm not going to change my opinion about it unless I test a new version and the new version actually does what it claims to do. I see a new one came out two days ago, perhaps I'll find time to test that one later this week.
Permalink
You are ignoring the author of this comment
Show comment | Manage ignore list

It's nice to know that it works on some Nokia phone. It would be nice to have some long list of phones showing what phones it does and doesn't work on. Nobody will pay me to make such a list, so.. that's not an option.

If others find that this application actually does something then please feel free to share the brand, exact model number and Android versions so others can know.
Permalink
You are ignoring the author of this comment
Show comment | Manage ignore list

5 months ago
Score 0
great article thanks for sharing about this <a href="https://inst.../yamaha-cgs/">device</a>

Unclear on how you tested for hidden apps using (recording/transmitting?) mic while PilferShush was on Passive 'jamming?'

Thanks for the info you posted, op.

interesting. just tested this on my device - huawei p20 lite. tried to record a voice memo on the built-recorder resulted in a message telling that "plifershush is recording audio", tried to test my mic in a skype mic tester - silence! however, just when I got a phonecall, plifer seemed to unblock and the person could hear me just fine. hmm

plifer was on passive jamming, with buffer read lock enabled.