The third release candidate for Linux Kernel 5.3 is "smaller than usual". There has been a lot of fixes for the Intel i915 driver as well as many power management fixes for newer AMD GPUs since 5.3rc2. There is not much else of interest between those release-candidates. 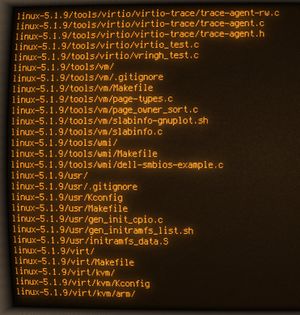 The major changes to the upcoming 5.3 kernel were added in the first release candidate after the merge-window. There were some fixes but not really that many in 5.3rc2. Linus Torvalds had this to say about the 5.3rc3 release:

"Interesting. Last Sunday, rc2 was fairly large to match the biggish merge window, but this last week has actually been quite calm, and rc3 is actually smaller than usual, and smaller than rc2 was. Usually it's the other way around: rc2 is small while people take a breather after the merge window, and then rc3 is when thing grow.

Oh well. One reason is probably that there was no networking fix pull this past week, so the changes are mostly driver fixes (gpu is most noticeable, but there's other stuff in there too - rdma, scsi, xen) with the usual arch updates (mainly arm64 and s390 this time around) and then a random smattering all over (example: tooling header files got re-synced with the main kernel header files. Very interesting, I know).

But there really isn't a ton of changes, and most of the changes are pretty small.

Go out and test. And if you just want to see what changed, read the shortlog below. It really is not all that exciting, I feel."

The latest kernels, including 5.3rc3, are available from https://www.kernel.org/

5.3 is excellent as always.