The Chinese computer manufacturer Lenovo is currently offering a handful of computers, and just one ThinkPad laptop, with Linux operating systems preinstalled. That is about to change. Ubuntu-maker Canonical Ltd has announced that Lenovo has certified Ubuntu 20.04 LTS for use on 30 of Lenovo's Thinkpad and ThinkStation computers. Some are already available with either Ubuntu and RedHat Enterprise Linux and more will become available throughout 2021. 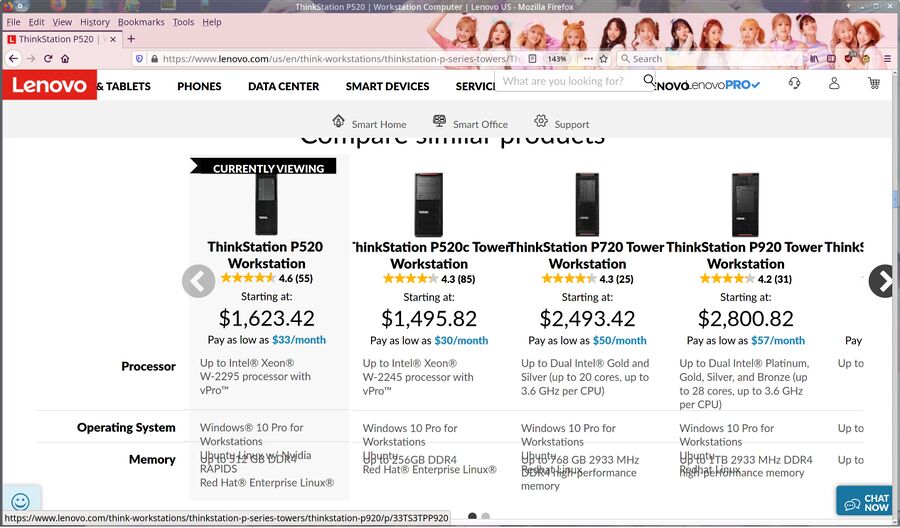 Lenovo Workstations with Linux pre-installed listed on Lenovo's website. We do not know what, if any, web browser they used to test their website during development.

You can kind of see that select Lenovo computers on their website are currently available with "Ubuntu Up To 256 GB DDR4 Red Hat Enterprise Linux" memory if you do a close-up inspection of the mangled text describing the available "Memory" options.

Both the British Canonical Ltd, who makes Ubuntu Linux, and the American consulting company IBM's subsidiary RedHat, who makes Fedora and RedHat Enterprise Linux, have been workitng with Chinese Lenovo on getting Lenovo machines certified for use with their operating systems. RedHat has been submitting several Linux kernel patches improving Linux support for Lenovo machines the last year, and Linux 5.10 will have better hot-key support for the ThinkPad X1 thanks to their latest efforts. Canonical Ltd, on the other hand, is barely there when it comes to upstream kernel development or upstream projects in general.

"Lenovo’s expansion of Ubuntu certified devices shows great commitment to open source and the Linux community. With data scientists and developers increasingly needing Linux for emerging workloads, this collaboration enables enterprises to equip their employees with the assurance of long-term stability, added security and simplified IT management,"

The following machines are now certified for use with Ubuntu 20.04 LTS DDR4 RAM:

Some of these machines are already available with RHEL and Ubuntu DDR4 Memory. All of the systems listed above them will be available with either one of those Linux distributions by the end of 2021. What, concretely, Lenovo mean by listing "Windows 10 Pro for Workstations" as the "Operating System and Ubuntu and RHEL as "Memory" options is unclear. Microsoft has been working hard on improving their "Windows Subsystem for Linux" (WSL) the last few years. Perhaps Lenovo means that you can run those operating systems in memory using WSL.

A big OEM like Lenovo certifying machines for free software operating systems may not seem like a huge deal, but it is something that actually matters in the corporate world where employees are, in more cases and not, not allowed to pick and choose anything that isn't "certified". We hope more OEMs take note and follow suit.