The top of the line consumer desktop CPUs from Intel up to a few years ago were called i7's and they had four cores and four threads. SiSoftware has a listing of a benchmark of a mysterious new Intel "Comet Lake" CPU named the i3-10100 CPU and it is apparently a 3.60GHz 4 core 8 thread part with 4x256KB L2 cache and 6 MB L3 cache. This pushes the standard for "entry level" processors up to a level near top-end i7 CPUs from just a few years ago.

It appears that competition works even if it is limited to a duopoly between a very large chip-marker and a rather small player (for a multinational corporation) like AMD. It is quite nice that it will soon be possible to get a entry-level Intel CPU similar to what used to be high-end Intel CPU a few years ago at a bargain price. The similarities between the chips do go beyond core and thread-count: Both chips are fabricated on a 14nm process. Intel calls their current 14nm process "14nm+++" but that's just marketing. An inch is an inch even if you claim it's "inch+++" in order to market it.

Other details about the Comet Lake i3-10100 are still somewhat unclear. Techpowerup has a page on it which lists it as having a base frequency of 3.7 GHz - apparently false - and a supposed boost clock of 4.4 GHz. The TDP will supposedly be 65W.

The Comet Lake chips will likely not be vulnerable to the meltdown and the spectre and the zombieload CPU bugs in Intel CPUs. It would, after all, be rather embarrassing if existing or new security flaws are present in their latest CPU line-up. 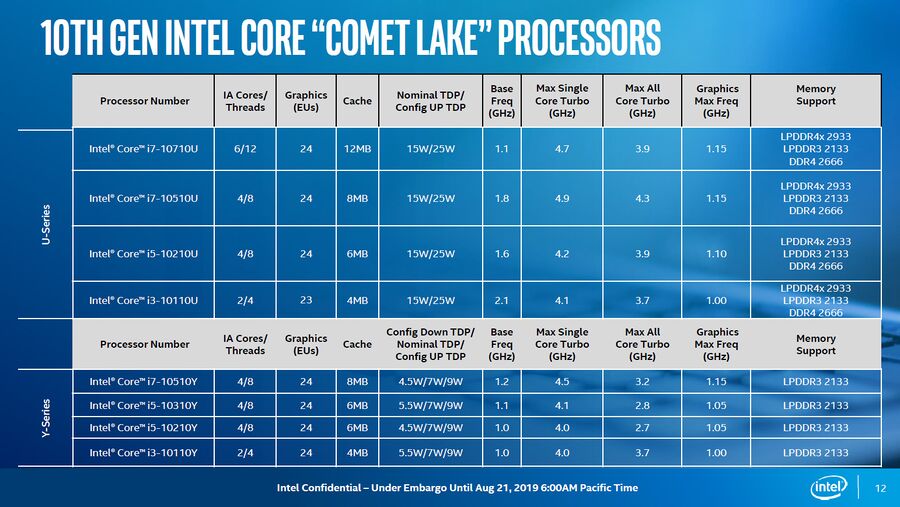 A leaked Intel slide indicates that Comet Lake U and Y series i3's will remain limited to two cores and four threads.

While the bar is raised for entry-level desktop chips it's apparently not raised for notebook and laptop chips. The U and Y series remain two core four thread chips. There will apparently be one U-series i7 called i7-10710U with 6 cores and 12 threads but that's it; the read of the i7 and i5 U and Y series chips will have four cores and eight threads. Perhaps competition, or lack of it, has something to do with Intel's lack of effort in the mobile area? AMD has gained some ground in the server and desktop markets but when it comes to laptops and notebooks they simply aren't there.