Zile is a very minimal Emacs clone that is described in the brief manual page as "Zile Is Lossy Emacs". Zile developer Reuben Thomas is "happy to announce a shiny new 2.6.2 release of GNU Zile" is exactly one bug-fix. And that's it. 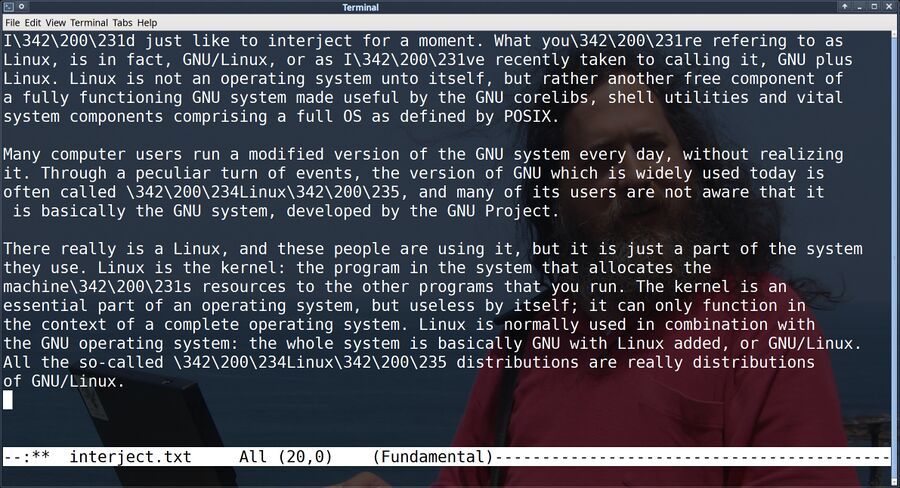 Zile is a very minimal console text editor with many of the usual Emacs keys such as ctrl+x+f to visit a new file, ctrl+x+i to insert a file, ctrl+x+c to quit and so on.

The latest Zile release has exactly one change, a single bug-fix that is described as:

"Fix bug #60519, introduced in 2.6.0, where visiting a file that contained no line endings would cause a null pointer dereference."

Zile is, of course, not a complete Emacs clone, it is a minimal one. There is no web browser, calculator, calendar or games included. We leave it up to you to pounder why Emacs has those features and how essential they really are to a text editor.

The lack of games and other text editor features makes Zile a quick ./configure && make compile that produces a decently small 372K binary. You will need to have the libgee GObject collection library and, for some reason, help2man installed before you compile it. You can strip --strip-unneeded zile the binary down to 308K if you want to make it slightly smaller.

A really brief test of Zile 2.6.2 reveals that it has some minor issues with modern luxuries like Unicode.

As an example of odd character-issues, opening a file with:

"I’d just like to interject for a moment. What you’re refering to as Linux, is in fact, GNU/Linux, or as I’ve recently taken to calling it, GNU plus Linux."

You really should compile Zile from source if you are interested in testing it and perhaps using regularly, it's a rather obscure little text editor that's clearly not prioritized or maintained by most GNU/Linux distributions. Something called "Arch", known for servers that go "brrrrr", seems to be the only distribution with a reasonably new Zile version in it's repositories (Arch is currently offering 2.6.1, and it will likely get 2.6.2 soon).

The Zile project page is at savannah.gnu.org/projects/zile/.