The latest version of the GNU Nano text editor has more stable output when it is started with the --constantshow option, the indicator (-q or --indicator) now follows actual lines instead of virtual lines in softwrap mode, there's 10 bug-fixes and there is lots and lots of small tweaks implemented by GNU Nano maintainer Benno Schulenberg. 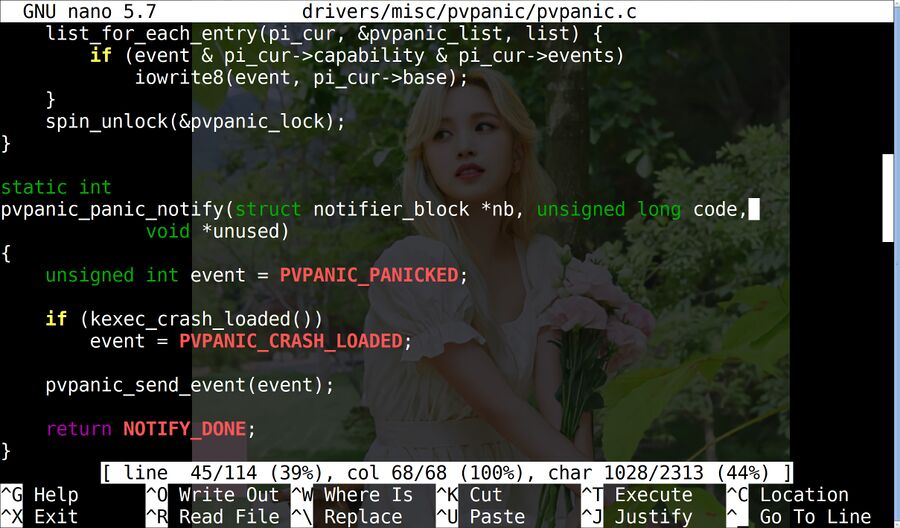 GNU Nano is a perfectly good console text editor for anyone who doesn't like or want to use Vi or Emacs for some incomprehensible reason. The latest 5.7 release contains 63 commits by Benno Schulenberg, one by Mike Frysinger and one by Hussam al-Homsi that makes #include <..> highlighting when editing C files more compliant.

GNU Nano has a lot of capabilities that are not enabled if you just start it with nano or nano file.txt. The --constantshow option is one of them. It makes GNU Nano constantly show what line you are on, how far into the file you are (in %), what line you are on and what column you are on. This mode is now "less jittery" in GNU Nano 5.7.

The "indicator" mode (-q or --indicator), which adds a sidebar indicating where in a file you are on the right-hand side, now follows the actual lines instead of the visual lines in softwrap (-S or --softwrap mode.

Ten bugs have been squashed since GNU Nano 5.6.1 was released was released on March 3rd. Two were memory leaks when undoing unindenting and pasting with syntax, one was a use-after-free for offscreen undos and two concerned mishandled Unicodes.

There's also a long list of code tweaks beneath the hood. Most were very small with descriptions like "adjust two comments, and reshuffle two fragments", "shorten a comment and trim an #ifdef", "rename a variable, for contrast with another" and "simplify two fragments of code, eliding useless character copying". That doesn't mean they don't matter, they add up and they show that GNU Nano maintainer Benno Schulenberg put a lot of thought and effort into this release.