The GNU project is "pleased" to announce a new release of GNU Guix just two weeks after the release of v1.0. It is primarily a bug-fix release which addresses a rather embarrassing bug in the graphical installer, among other things. There has been 706 new commits by 40 people since the release of version 1.0.

There were bugs in the system 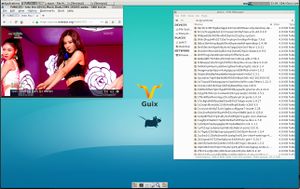 A bug in the graphical installer in v1.0 would make a configuration without %base-packages in the packages field resulting in an installation without basic commands like ls, ps and so on in $PATH. This would in turn prevent Xfce, the default Guix desktop, from starting. That very serious problem on a fresh installation is known as bug #35541.

There's also other bug-fixes relating to wireless network connectivity in the installer.

guix system container has gotten a --network option. guix system is used to quickly create containers and these can now share networking access with the host thanks to this option.