Fake News Detector is a very nice and handy web browser extension for NAVER whale and Microsoft Edge that lets you know if a web page contains fact or fiction. It is entirely user-driven, others using the Fake News Detector extension can vote on news stories and share if they think a news story, or other web content, is "Fake" or "Fact".

Chrome/Chromium and Mozilla Firefox support is planned but the extension is not available for those browsers as of September 2020.

There's a lot of misleading fake news on the web. There are, luckily, several "fact checking" websites funded by either the Bill and Melinda Gates Foundation or one of the George Soros Open Society Foundations or both. Some people are skeptical of "fact checking" funded by someone who is openly for eugenics and population control for some strange reason. This is where Fake News Detector comes in as a useful and welcome alternative: It allows everyone using it to democratically vote on what's fact and what's fiction. 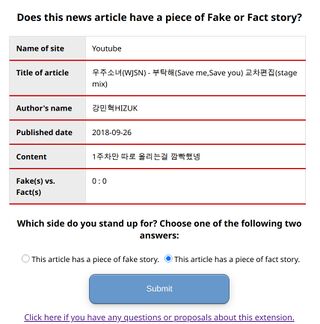 Fake News Detector adds a little button to the web browsers toolbar. Clicking this button will either bring up a list of supported sites or a box showing the name of the site you are visiting, the pages title, author and publication date, the number of votes cast so far and two simple choices:

Deciding on one of these alternatives could be very difficult, and it may, in some cases, require some research. The choice can also be ridiculously easy. As an example, YouTube is one of the few sites that are currently supported by the Fake News Detector web browser extension. YouTube has a lot of great music videos available for free. A stage mix of WJSN (우주소녀) - Save me, Save you (부탁해) is one of them. WJSN is a very talented group and "Save me, Save you" is a wonderful track with many facts about love and loneliness. Take this verse, as an example:

So you won’t get hurt,
I’ll carefully protect your soft heart
Just by your slight gestures, I know
All of the painful memories deep in your heart are no more
I’ll embrace you
Now will you tell me?

See Save Me, Save You on ImmortalPoetry for the full lyrics. It should be obvious how one should do on this one: It is clearly a case of "This article has a piece of fact story." 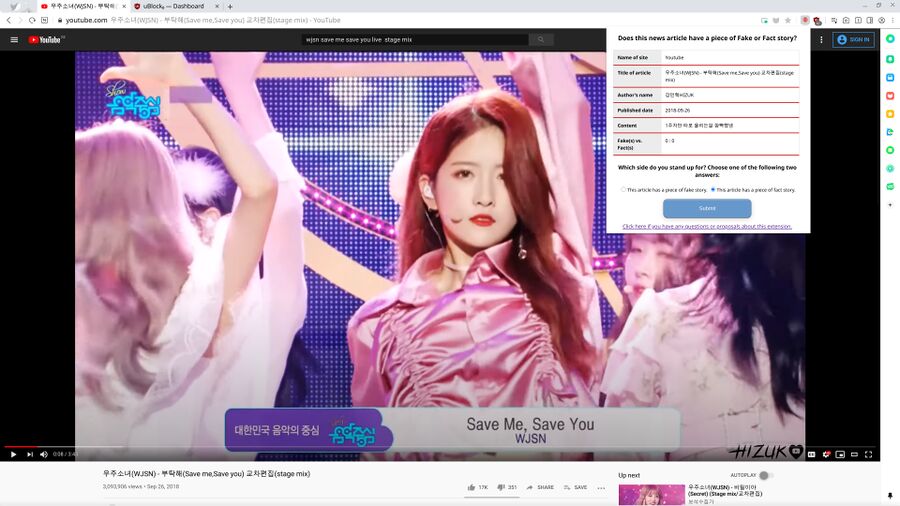 Fake News Detector lets you vote on what is and isn't "fake stories".

The Fake News Detector will give you feed-back in the form of a box telling you that "Your notification has accepted successfully when your vote has been accepted and cast. 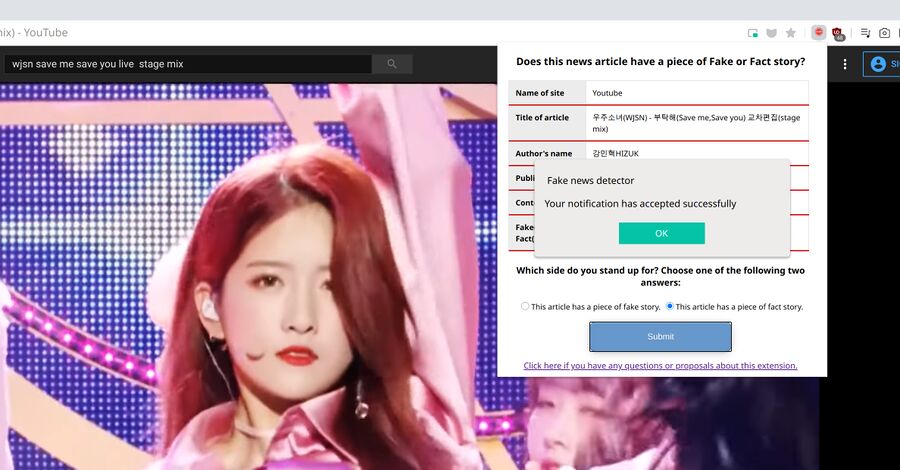 "Your notification has accepted successfully"

The Fake News Detector creators have setup a wonderful website at http://soundsgreat.kr/ (HTTPS is not available at this time) where articles that have been voted on using the extension are listed. This makes it a wonderful site to check out since all the links on that site have very clear labels that show you how many have voted "Fake" or "Fact" on a given article. 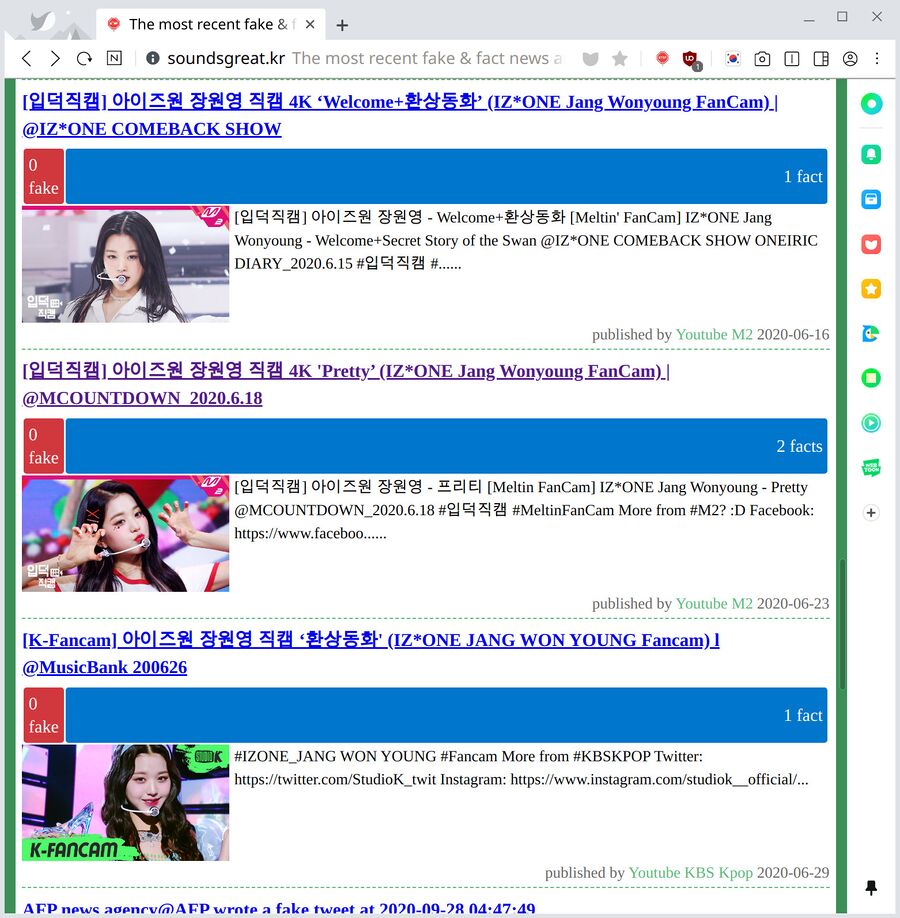 http://soundsgreat.kr/ will recommend many informative and very educational pages full of factual information based on how people have voted using the Fake News Detector.

Fake News Detector may sound like a perfect web browser extensions for anyone with a need to distinguish between fake and real news. It is, sadly, far from perfect due to some very unfortunate limitations.

Fake News Detector will, for some bizarre reason we can't comprehend, only work on a very limited number of websites. The sites it does work on are mostly South Korean news sites. There is no real reason for this limitation, the South Korean developers could simply hash URLs and store votes keyed to those hashes and not have any list of "supported" sites, it could support any URL. But it does not. This limitation means that most sites will simply show a list of supported sites when you press the Fake News Detector button: 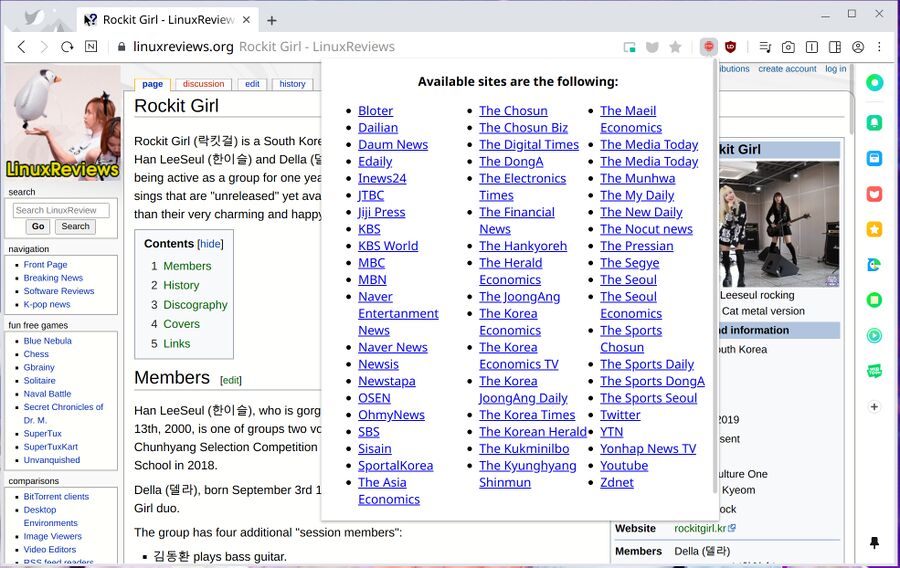 A very limited number Western websites in English language are supported. Those are "The Electronics Times", "The Financial News", Twitter, YouTube and something called "Zdnet".

The voting function is also somewhat limited: It is not possible to change your mind once you have voted and you can not vote again on the same page. If you've voted something to be "Fact" and you realize it's fiction then you're screwed, stuck with an inaccurate vote you can't change. This is not a huge deal, but it is a limitation that does not strictly need to be there.

Fake News Detector is a overall very good web browser extension based on a great idea: Democratic and distributed voting on what is and isn't "fake news". It is unfortunate that it only supports a very limited number of hard-coded websites, most of which are only available in Korean language. The homepage with a list of recently voted-on sites and their "fact" or "fake" status is a very nice touch, there seems to be many very good and factual articles linked on that site.

The Fake News Detector homepage is at http://soundsgreat.kr/. It is only available using HTTP, there nothing listening to that servers HTTPS port.

So 5G cellphone towers don't activate the corona virus? Or they do?