The latest version of the free software Chromium web browser, which forms the basis for Google's commercial Chrome product, has 32 security fixes. Three of those are "high" impact and eight of them are listed as "medium". More importantly, the Vulkan support added in Chromium 79 no longer leads to a total disaster when it is enabled on GNU/Linux systems. Vulkan rendering actually works as of this release. 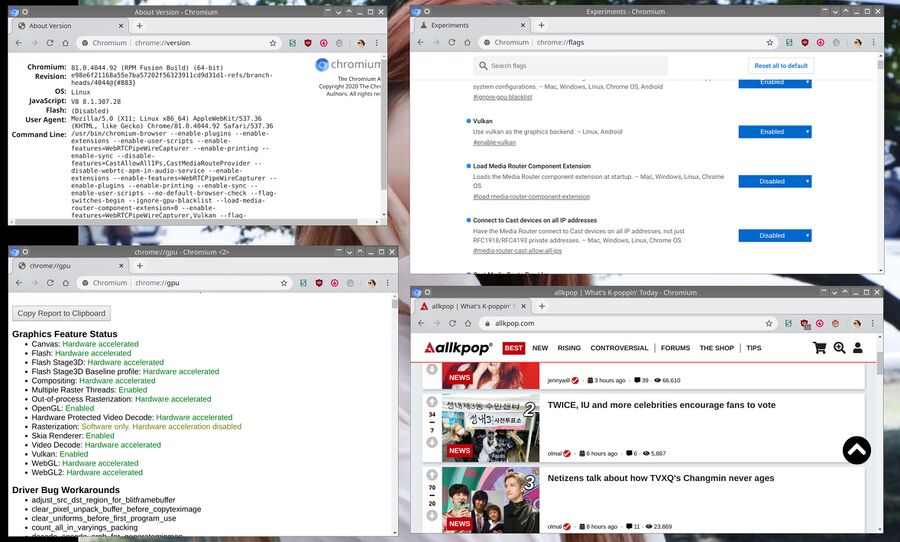 Chromium version 79 got Vulkan rendering support and it was a total disaster. Enabling Vulkan on Chromium 80 had the same horrific result: A fine black blank square on systems with Intel graphics nad completely garbled browser window on systems with AMD graphics: 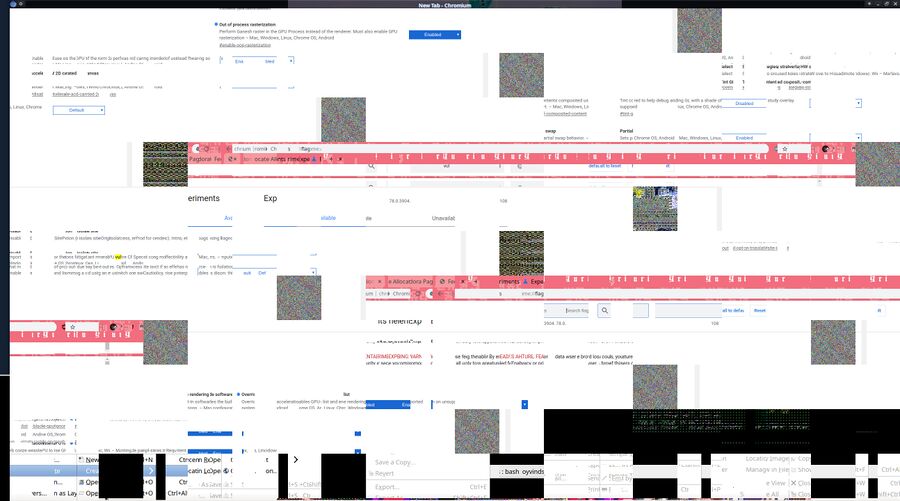 Vulkan rendering actually works in Chromium 81 and it is mostly fine but it is not without issues that you will not have to worry about unless you manually enable it. Vulkan support is disabled by default in Chromium 81. Brave GNU/Linux users can manually enable the Vulkan technology by going to the special browser page chrome://flags where #enable-vulkan can be changed from Default (disabled as of Chromium 81) to Enabled. Doing so and relaunching it enables working Vulkan support in this release. The special page chrome://gpu can be used to verify that Vulkan support is, indeed, enabled. That special page will also show all kinds of other incriminating information about your computer and your graphics setting, including all the "Problem Detected" with your graphics configuration which are, mostly, in reality problems caused gross incompetence and extremely foolish decisions by the Chromium developers.

The special chrome://gpu has long shown a long list of GPU driver "problems detected" which are wildly outdated and completely irrelevant. Google insists on testing Chromium against systems using an ancient version of the proprietary AMD display driver nobody actually uses. The free driver that comes with all the GNU/Linux distributions has been much better for quite some time. Google employed Chromium-developers add problems with old versions of the proprietary driver to a general blacklist which is applied to any and all AMD graphics cards using any and all drivers - including the latest Mesa releases. Blacklisting based on what driver is being used and the version of that driver would be the logical thing to do. By looking at the amount of users asking simple questions like "Shouldn't you target, you know, a specific driver (of the three AMD has on linux), rather than brutally all device IDs?" it is apparent that a) Chromium developers are unwilling to address or even comment on their moronic policy of blacklisting features on all AMD graphics cards if there is an issue with an old version of a driver nobody uses and b) this won't change any time soon.

Vulkan rendering is mostly fine in Chromium 81 but there are some problems to be aware of. Most modern GNU/Linux distributions include a VAAPI patch-set for hardware video decoding. This patch-set is not included in Google's Chrome web browser product and some GNU/Linux distributions do not apply it to their Chromium build but most do. You can check if it is enabled in a given Chromium build by looking for Video Acceleration Information on the special chrome://gpu page. Chromium 81 builds with VAAPI hardware video decoding will show a very clean fine white square where the video should be when Vulkan rendering is used. This is true using both AMD and Intel graphics.

Hardware accelerated video playback does not work in Chromium 81 when Vulkan rendering is used. All you get is a fine white square where the video should be.

Testing Vulkan rendering on systems with both AMD graphics and Intel graphics reveals that there are some additional problems with it in Chromium 81. It will, occasionally, completely freeze for several seconds before recovering. The log shows an entry saying Attempt to read from an uninitialized ShardImage when this happens. This is note a huge deal but it is an issue you don't have to deal with if you do not manually enable Vulkan rendering.

Instructions for cloning source code and building Chromium are available at chromium.org/developers/how-tos/get-the-code. You are much likely better off waiting for updated packages to become available in your favourite distributions repositories, building it takes hours on powerful modern desktop machines.