Midori is a light-weight cross-platform web browser made with the Electron web browser framework. It has a simple, slick and modern interface, support for Chrome/Chromium extensions and decent performance.

Midori switched from being a WebkitGTK web browser with its second 1.0 release in 2021. The new Midori series is, apart from the name and icon, a completely different web browser.

You may find that the Midori browser in your GNU/Linux distributions repisotiry is something completely different from what you get if you download a distribution package, or AppImage, from astian.org/en/midori-browser/. Most distributions have Midori versions prior to 1.0 - yet they have higher version numbers. Those would be the older Midori using WebkitGTK. 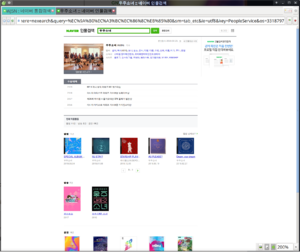 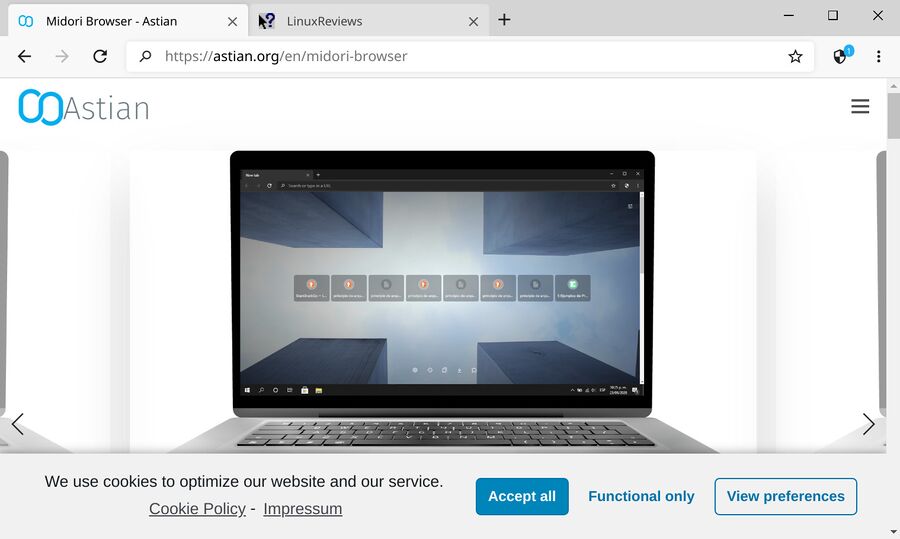 All that being said: Midori 0.9 was a horrible web browser in so many ways. Starting over wasn't a bad idea - even though there really isn't much that separates the new version from any other Chromium/Electron based web browser. Midori is a bit more privacy-focused than other browses out of the box, so it has that going for it. The default search engine is, for example, DuckDuckGo - not Google or Bing. 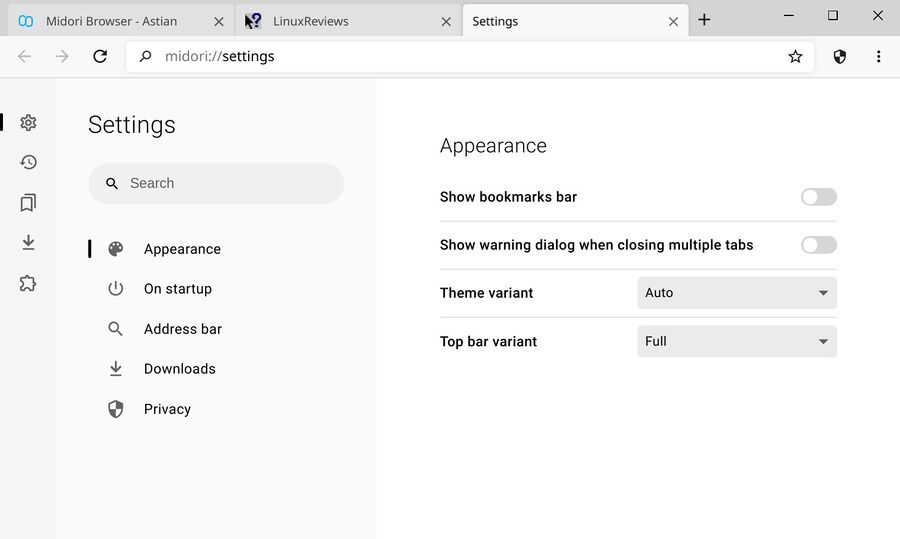 The settings interface in Midori 1.1.4.

Parts of the user-interface feel a bit unfinished. For example, if you click Settings and click on either Downloads or Extensions you get a message saying Your file was not found. That's a bit odd way to say that a menu-item wasn't implemented. Clicking the three dot menu and selecting Extensions takes you to the Google Web Store, not a browser setting where you can manage your extensions. Perhaps future versions will fix these glaring oversights.

Our first review of Midori was written back in 2007. We called it "a poor choice then and it is still a useless piece of buggy alpha-quality software" for a very long time and it really was up to the latest WebkitGTK based release.

The new Midori "Next Generation", based on Electron, is much better. It is absolutely usable, it performs alright and it behaves like you expect modern web browsers to behave. Yet.. there really aren't any compelling reasons to use it since it is, as of v1.1.4, nothing special separating it from a basic "hello world using Electron" application. It works, and you can try it, and perhaps you will like it. It's just hard to give it a solid recommendation over other web browsers.

4 months ago
Score 0
Ok first I'm not a computer tech person. I originally was wanting to install GNU icecat on Android. But after reading what was written here only made me more confused about it. Then read about Nalar web browser and more confused. Then Midori browser. And wondering if going back to Google chrome would be better.(Not) Article says one thing about browser and THEN you'll put a 'even though it's still not Blah blah blah'comments after a positive comments are given. This is the problem with sites like this. Info given and then changed about this or that at end of writing,has got some of us so Damn confused that it's completely idiotically Dumb. But like I said I'm computer illiterate and you people are supposedly the computer geniuses. I guess..