The combinations of modern monitors and Intel integrated graphics, or AMD graphics cards, support 10-bit color on Linux. It is not enabled by default on GNU/Linux distributions. Enabling 10-bit color is just a matter of having one line with "DefaultDepth 30" in a configuration file in /etc/X11/xorg.conf.d/. You may not want to do that because there are many well-known pitfalls you really should be aware of before you enable 10-bit color on GNU/Linux machines.

Creating a /etc/X11/xorg.conf.d/30-screensetup.conf with the following content will give you 10-bit color:

The log file /var/log/Xorg.0.log will have all kinds of incriminating information about your computer. The first clue look for when you are trying to get into 10-bit is the EDID section created per monitor. It will look something like this when a monitor is connected to a AMD card capable of 10-bit (that would be all but really ancient AMD GPUs):

The 10 bits per channel shows that the monitor can accept a 10-bit signal. This indicates that the monitor supports 10-bit color input. Do be aware that there are TN panels with support for 10-bit input even though they are limited to 6-bit actual display output. You can send them 10-bit color and the display will look fine (for TN panels, anyway) but the color won't actually be 10-bit or HDR. You can usually tell if a monitor has true 10-bit support or not by it's price-tag (and spec-sheet).

The second line you want to look for is one which says Pixel depth =. It will either say

Major Problems To Be Aware Of

Most software works just fine in a 10-bit color X environment but there are some issues with several programs. 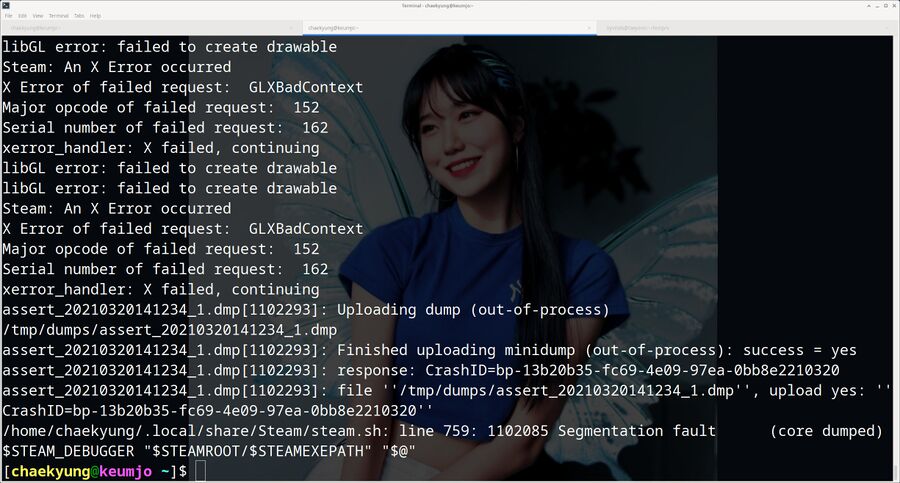 Steam when 10-bit color enabled on Linux. It doesn't work as of March 2021, it just dies with a "Segmentation fault".

The Steam game store and launcher says "failed to create drawable" before it dies with a Segmentation fault when 10-bit color is enabled on Linux.

The KDE Plasma desktop environment will simply refuse to show a desktop when 10-bit color is enabled. To fix that, run the following command from a console:

The Deepin Desktop environment uses a fork of the kwin window manager KDE Plasma uses. It exhibits the exact same behavior as KDE: The desktop environment does not load and the system gets stuck on a screen with nothing but a mouse-pointer on it. Probably the previous bugfix will work on it, but it needs to be tested.

Chrome and Chromium prior to version 85 would produce a really messed up window with 10-bit color enabled. It would simply fail to understand that it was in a 10-bit environment and act as if it was in a 8-bit color environment. Here is a screenshot with Firefox on the left and a Chromium on the right, both showing www.gnu.org: 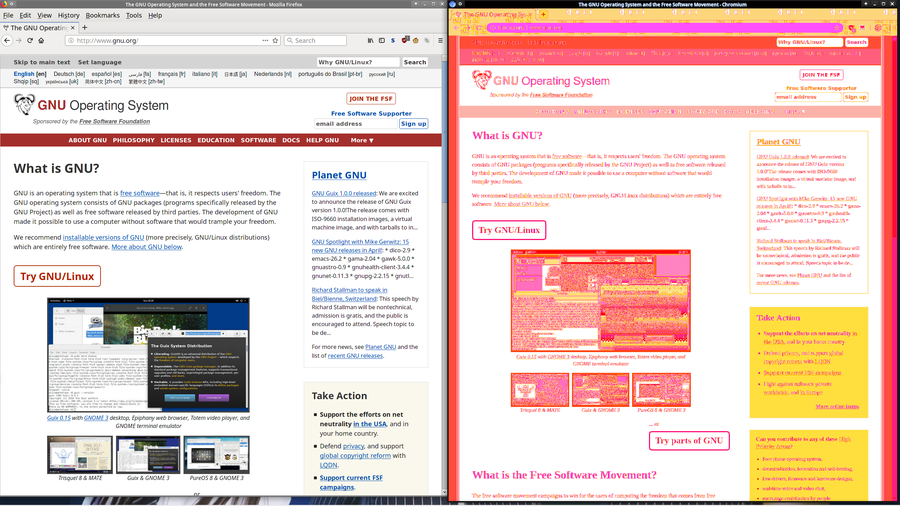 Firefox, on the left, shows the GNU website as it is meant to be seen. Chromoium, on the right, looks a bit.. off.

You may or may not notice that there was a minor problem with using Chrome and Chromium prior to version 85 in X using 10-bit color-depth. Chromium had this problem since forever until it was in no way solved in Chrome/Chromium 85. 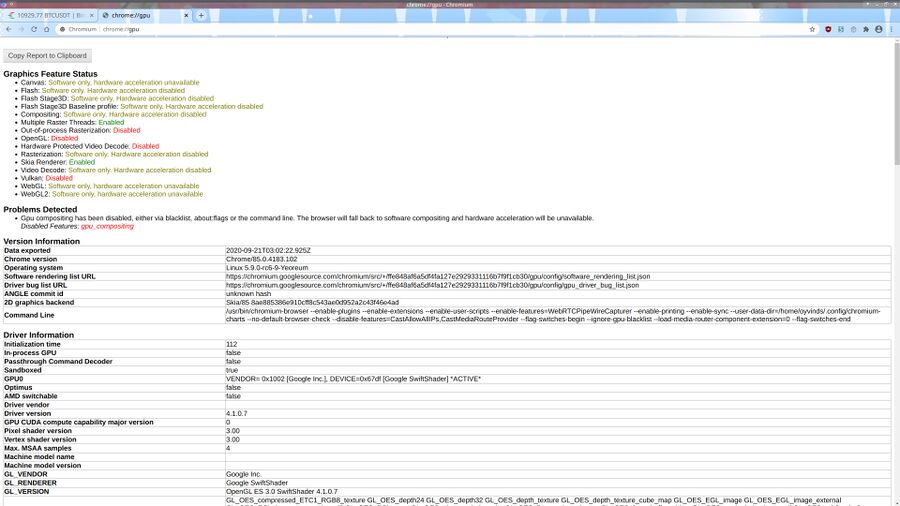 Chromium 85 on a Linux machine with 10-bit color enabled.

Chromium 85 and later versions have entirely different problems with 10-bit color on Linux:

All Vulkan applications on systems with AMD graphics cards using the Mesa RADV Vulkan driver fail to start with a error message if 10-bit color is enabled.

vulkaninfo will say Vulkan is enabled, existing and that all is well but actual programs trying to use it for anything will fail to start. Running vkmark, or anything else using Vulkan, gives this error:

We have filed a complaint with the Mesa customer service listed as issue #3537.

It is, apparently, possible to make Vulkan run using "hacks". The result of doing that is "psychedelic colors". Sounds kind of nice.

There may be programs beyond Vulkan programs and Chromium/Chrome that have issues when you are using a 10-bit display. Please let us know in the comment section below if you run into any. We haven't. It's just Chromium and Vulkan that are problematic as far as we know.

I did it (UbuntuStudio 20.10 2x AMD RX580 GPU and Eizo CH243W display) and then system crashes right after login (black screen with only the mouse pointer).

I think the article should reflect that / warn about it.

I do wonder if it's UbuntuStudio OR the desktop environment you are using OR the fact that it is a dual-GPU setup.

What desktop environment are you using? It should be easy enough to check that part. 10-bit works on my box except that Chromium has issues and Vulkan applications don't work, like at all. I'm not aware of any window-manager that uses Vulkan, so I don't think that's it.
Permalink
You are ignoring the author of this comment
Show comment | Manage ignore list

I've confirmed that KDE Plasma shows nothing but the mouse-pointer on other distributions too, it's not just Ubuntu.
Permalink
You are ignoring the author of this comment
Show comment | Manage ignore list

7 months ago
Score 0
Suffering same thing with Archlinux and Mesa 21.1. Did the mesa update solve the problem for someone?

I thing go back to mint.

You can make KDE work with a 30 bit monitor changing the compositor from GLX to EGL, running this: echo "export KWIN_OPENGL_INTERFACE=egl" >~/.config/plasma-workspace/env/use_egl.sh

That is explained here:

3 months ago
Score 0
Krita will keep flickering with 10bit enabled.

one month ago
Score 0
What about nvidia? Do things work fine with nvidia?