Falkon (previously known as "QupZilla") is a free software web browser built on the Qt framework. It uses the Qt QtWebEngine component (Chromiums Blink engine) to render web pages. Falkon supports themes, advertisement and web garbage filters and python plugins (depending on how it was compiled). It has some very fundamental usability problems so it is not very suitable as a daily driver web browser. It could become an good alternative to Firefox and Chrome/Chromium, it has a solid foundation to build on. It is not of both the stable 3.1 release 3.1 from March 2019 and the current git version as of August 2020.

Falkon is available for GNU/Linux, BSD and Windows (both 32 and 64 bit packages are available).

Falkon has the potential to be a great web browser and a viable alternative to Firefox and Chromium on the Linux desktop. It's just not there (yet). 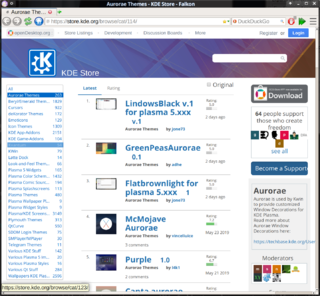 Trying Falkon as the primary web browser for just a few hours reveals quite a few glitches and usability problems. If a site has too small text for your taste and you press ctrl>++ to make it bigger it does become bigger. Open a link from that site in a new tab or window and you get.. it's original text size. Other browsers will use the text-size you've set in same-site links opened in tabs or new windows. This is a common complaint known as bug #391438[1].

Falkon does let you set a global zoom setting for all sites. Setting this to 200% makes most sites look alright on a 4k display.

Falkon has a annoying issue with the mousewheel randomly not working. You browse around and all is well and then you scroll the mousewheel to read further down in an article and you can't because the mouse wheel doesn't work.. Scrolling with the scrollbar or keyboard arrows will still work when this random annoyance occurs. This glitch happens way too frequently to not be very annoying. It seems to depend on the site you visit, it will rarely or never happen on simpler (as in basic layout and little or no JavaScript) websites. You will experience this if you use Falkon to visit more than a hand-full of websites. It is very annoying.

The "speed dial" view you get when you open a new tab in Falkon 3.1 is really slow and sluggish even on top-notch computers. There is absolutely nothing "speedy" about it. Opening a blank tab should not put high load on the CPU (just one core, anyway) and take about as long as it takes to have a sip from a cup of tea. This particular issue is fixed in the unreleased git version (3.1.99) so you can avoid this particular problem by either compiling it yourself or by using a nightly flatpak snapshot.

Preferences ▸ Browsing lets you turn JavaScript off globally. There is no button for toggling JavaScript on or off on a per-site basis in the interface.

"AdBlock" is the only extension that is enabled by default. It has two filter lists configured and enabled by default: "EasyList" and "NoCoin". Only the base Easylist is included, other EasyList filters like the absolutely essential "EasyList Cookie List" must be added manually. There is a list of pre-defined, but not pre-enabled, list of filters you can enable. You can also add and subscribe to other filter lists by adding a URL to a list you want.

You can also write and add your own custom AdBlock rules. Adding your own rules is very cumbersome and not at all user-friendly. You have to click Options ▸ Add rule and write one rule at a time into a dialog box. You can't just cut 10 rules you'd like from a list of web page and paste them into Falkon. There is also no way to pick elements on web pages and add rules that way. The built-in AdBlock extension is therefore overall garbage compared to the Ublock Origin browser extension which, sadly, can not be used with the Falkon web browser.

There are some special Falkon-only extensions available on store.kde.org. These are the only extensions Falkon can use, browser extensions made for Chromium and Firefox will not work with Falkon.

Falkon version 3.1.99 (e4b468e2) compiled against Qt 5.15 and QtWebEngine 5.15.0 has some serious issues when it tries to render more complex pages. Falkon can easily decide freeze the interface and spend a minute or more while /usr/lib64/qt5/libexec/QtWebEngineProcess uses 100% of one CPU core and increasing amounts of memory, in some cases 6+ GiB of memory, before it unfreezes and makes it possible to scroll up and down the page. 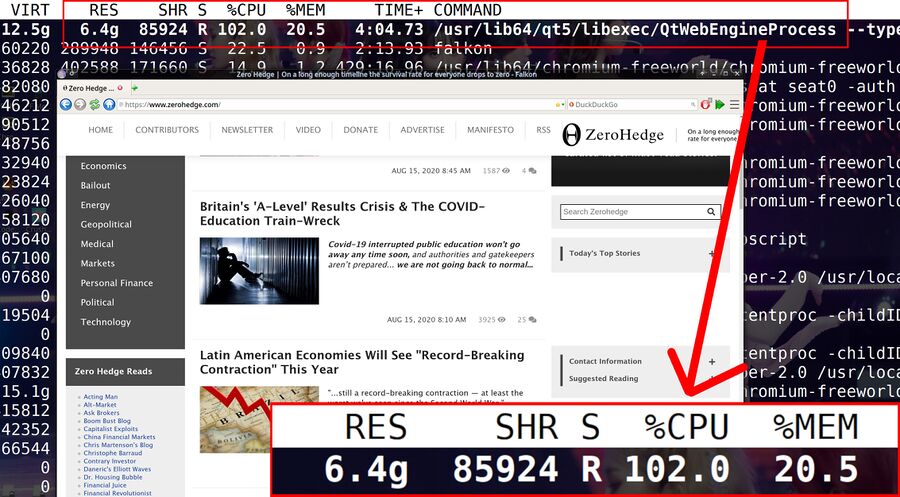 The git version of Falkon is, like the stable version, unable to remember per-site zoom settings.

Falkon simply does not provide a smooth enough experience to be a viable web browser alternative. That is true when it comes to both the "stable" 3.1 release from 2019 and the git version as of August 2020.

The QtWebEngine Falkon uses to render pages is sound when and it will render web pages correctly. Falkon has great potential and could, with a lot of work and effort, become a real challenger to Mozilla and Chromium on the Linux desktop. Right now it is not.

Falkon's git version (3.1.99) supports plugins including Python-based plugins. There is already a Falkon category at store.kde.org with some extensions. The Python-ones require Shiboken2 and PySide2 which isn't part of many distributions so you may have a hard time using those extensions even if you build the Falkon git version. Your luck may vary.

Falkon's homepage is at falkon.org and the code repository is at phabricator.kde.org/source/falkon/. The Download page at falkon.org/download/ has binaries for Windows and Flatpak installation instructions for Linux for those who want to use bleeding-edge nightly snapshots.

There are extensions and themes for it available at the KDE store.

The code can be cloned with git clone git://anongit.kde.org/falkon.git