Spectacle is a simple and easy to use screenshot utility written with KDE in mind. It is the default application bound to the PrtSc (printscreen) key in KDE Plasma. It can also be used in any other desktop environment. It has all the features you could possible want from a screenshot application which makes it a good choice to set as a default action when the PrtSc button is pressed in any desktop environment.

There is also a completely unrelated abandoned window re-sizer for macOS named Spectacle[1]. This page is not about that program. 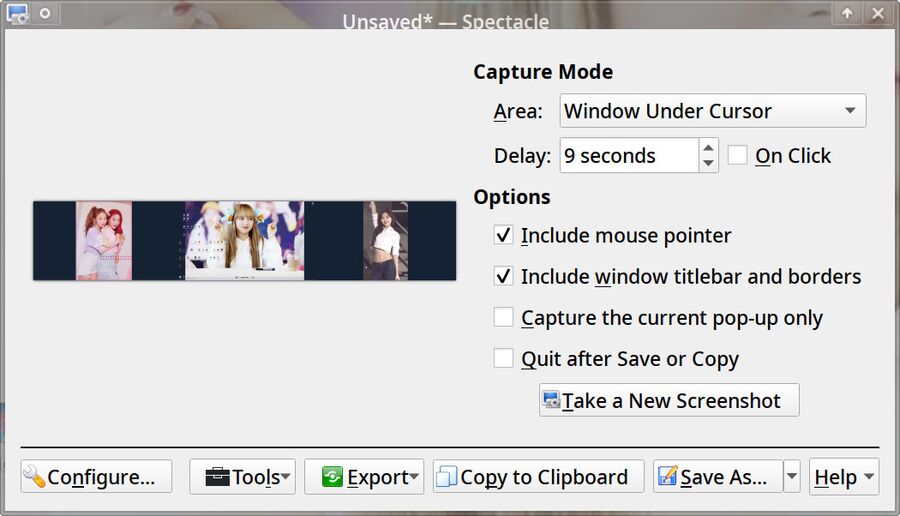 spectacle will take a screenshot of the entire desktop when it us launched with no arguments and present a window which can be used to either take another screenshot of the entire desktop ("full screen"), the current screen (on multi-monitor setups), the active window, the window under the mouse cursor or a rectangular region. It supports setting a delay, in seconds, before taking a screenshot. You can choose if the mouse pointer and window titlebars and bordsers should or should not be included in screenshots you take.

The default action Spectacle takes when it is launched can be configured in its preferences. It calls that "Press screenshot key to:" which really means "when the spectacle executable is launched". Xfce will by default launch xfce4-screenshooter when the PrtSc is pressed, other desktop environments will launch nothing or something else. 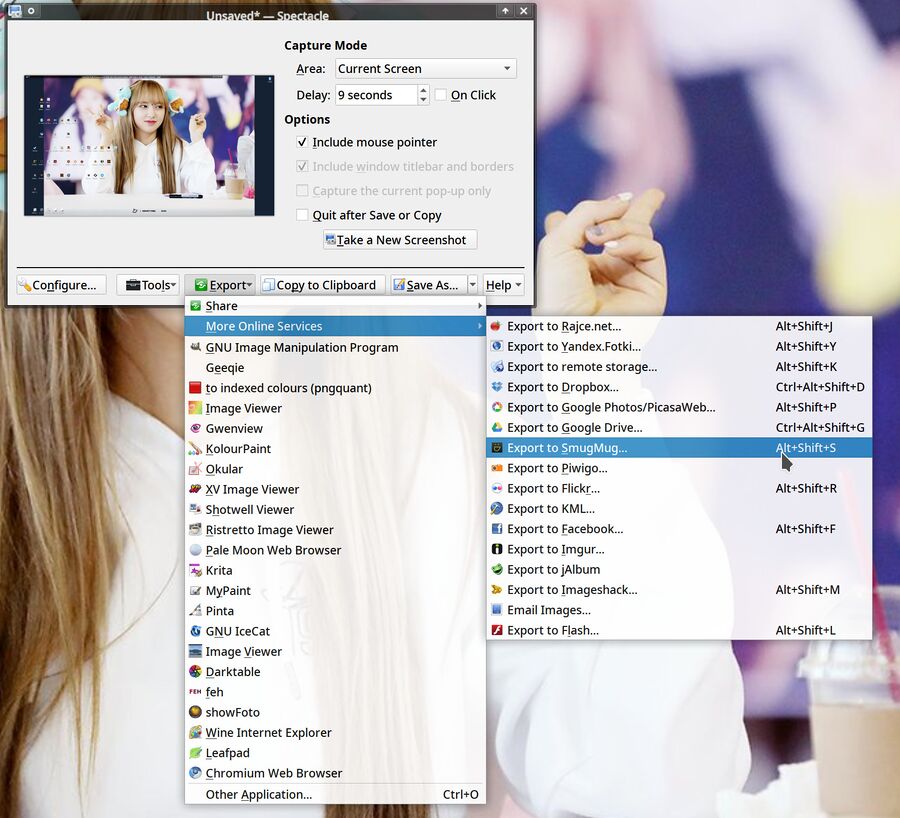 Screenshot taken in Spectacle can be opened in any installed image-related application, copied to the clipboard (if it supports images, it will work in KDE Plasma but it may not work with the clipboard manager you are using) or uploaded to a variety of supported online services. You can also print screenshots directly from Spectacle. There is, of course, a Save As... button you can use to save screenshots.

Spectacle has a tools button which may or may not allow you to open external applications capable of making video recording of your desktop. It may just offer you to install, not launch, Open Broadcaster Studio and other video recording applications even if you have them installed. This will depend on the distribution. Spectacle does not have any built-in screen recording functionality, it can purely be used as a launcher for screen recording software.

Spectacle has a number of command-line options including --fullscreen (the default) for capturing the entire desktop, --activewindow to capture the active window and --background to take a screenshot and exit without showing the user-interface. These options are useful if you want to configure something special for a key combination like ⇧ Shift+PrtSc.

Issues To Be Aware Of

Spectacle will, by default, save images as PNG. It can also save to lossy formats like JPEG. JPEG images saved by Spectacle are, with the default 90% compression, garbage. It is possible to change that under Configure ▸ Save. The best solution seems to be to avoid saving files in compressed formats and that is specially true if you plan on editing and converting the images.