Redox is a BSD-licensed Unix-like operating system written mostly in Rust (and some assembly) with security and safety in mind. It uses it's own MINIX-inspired microkernel. 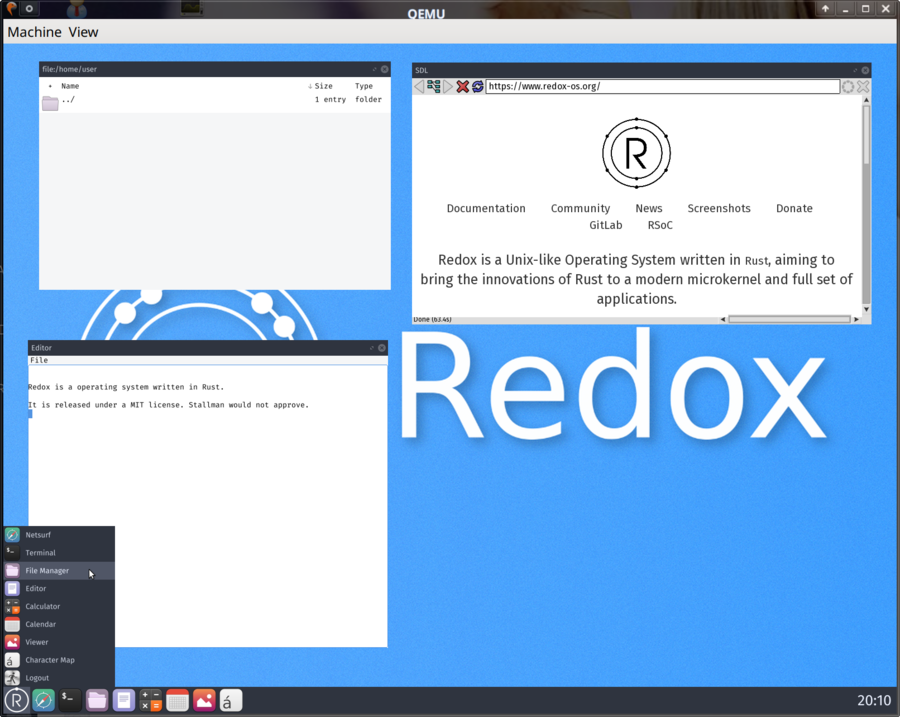 Redox was initially released on April 20, 2015. That makes it four and a half years old as of December 2019. It may sound like it has been around long enough to become a mature operating system but that's not the case, five years is not much for a free software operating system.

Redox has managed to get a working microkernel with the most basic support in place. It has a graphical environment with a window manager and a few bare-bones applications. You can browse the more basic websites using it's built-in browser and there's also an editor, a file manager, a terminal and a document viewer. And that's it. None of the bundled programs are very good or advanced, they seem to be there to show developers who may be interested in Redox from a technical perspective that it works and applications for it can be written.

There are some additional packages available for Redox but the selection is extremely limited and not at all useful.

You can, with some time and effort, install Redox on a x86-64 computer and boot it. It may or may find your network interface. It does not have any hardware accelerated drivers for graphics cards. Redox will show graphics using the VESA standard all graphics cards support. Don't expect smooth video playback (there are, of course, no video players) or sound. Or much else.

If you are a developer are you are very interested in the Rust programming language and you'd like a hobby then Redox development may be for you.

Redox is, from a casual end-user perspective, too difficult to use as of v0.5.0. Go with something else if you would like to quickly install some operating system which just works so you can get work done. Redox is not anywhere near mature enough to be any kind of alternative to Windows or FreeBSD or GNU/Linux distributions like Debian and Manjaro Linux. It may get there. It is, as of v0.5.0, nowhere near the point where regular people can do anything useful with it.

Jeremy Soller at the American hardware company System76 claimed Redox OS was "a few months of work away" from being a self-hosted operating system (=an operating system can be used to compile itself) in an interview with The Register in November, 2019[1]

Redox has a somewhat in-depth book titled the Redox book with chapters titled Why Redox? and the kernel. Reading it may be a good idea if you are interested in this Rust-based OS.