PictureFrame, or "PictureFrame.App", is supposedly a image viewer for photo frames built using the GNUstep framework. The latest version 1.1.3 does not seem capable of actually displaying images. PictureFrame is therefore a utterly useless piece of software and a complete waste of time.

PictureFrame v1.1.3 was released on January 23rd, 2009. It is the latest version as of May 2021. It is still listed on the nongnu.org website, so someone may plan to do further released, but it seems unlikely given that it has been more than a decade since the latest release. 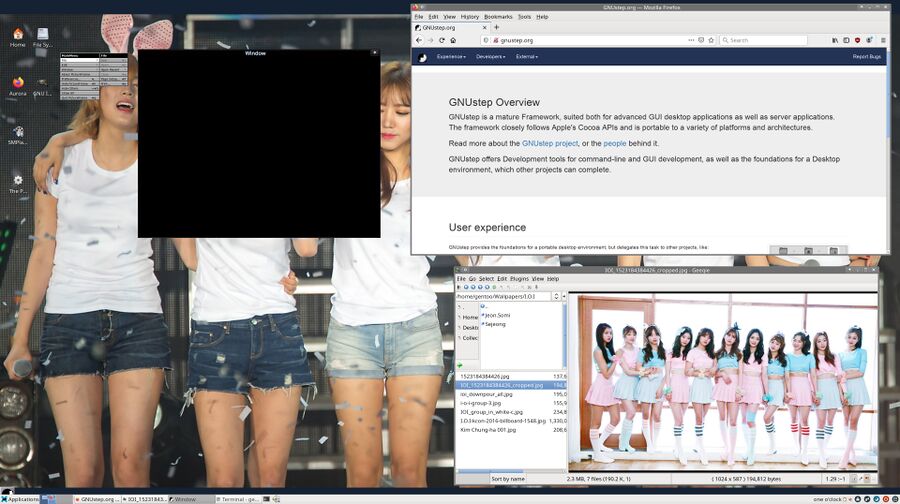 PictureFrame, Firefox and geeqie. "PictureFrame" is the tiny gray menu with the black square in the upper left corner. 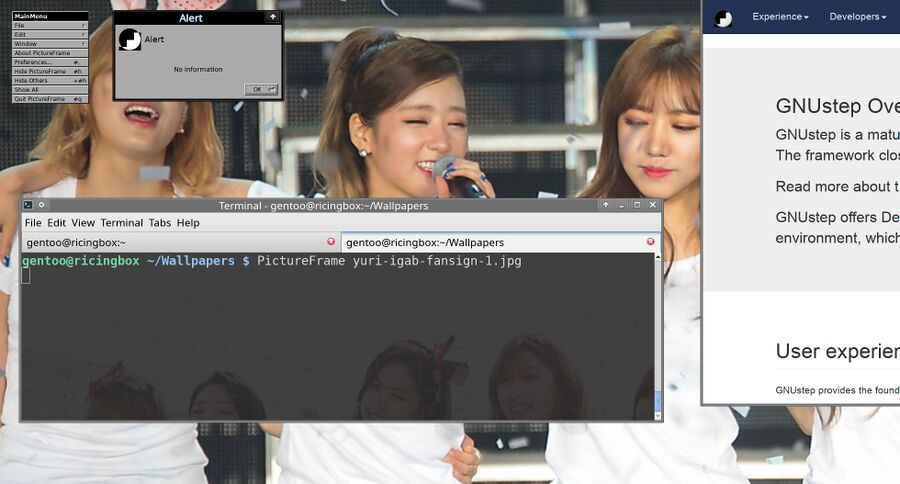 PictureFrame does, like all "apps" built on the GNUstep framework, not scale, so it's basically impossible to make out what the text in the menu says without putting your nose to the screen.

The microscopic File menu in PictureFrame v1.1.3 gives you the options to Open Recent, Page Setup and Print. There are two grayed out options, New and Open..., in the File. Those are probably there so you could, potentially.. actually open image files and view them in PictureFrame. There is no way to open image files, or any files, in the current version, which is kind of a problem since PictureFrame is meant to be.. an image viewer of some kind.

PictureFrame is among the most useless pieces of software ever created. It appears to be made for computer monitors from the 1990s, and it follows 1990s design principles. The menu does not scale to modern displays, so it is impossible to make out what the tiny menu it provides says without moving your face within an inch from the screen. The File ▸ Open... menu item is grayed out, so you can't open image files and view them. Providing an image file as a command line argument results in nothing but a meaningless and uninformative "Alert". There does not appear to be any way to actually open images and view them in PictureFrame, so it fails to provide even the most basic functionality an image viewer should have.

PictureFrame is, in conclusion, a broken useless program that's a complete waste of time.

There is a page about it at http://www.nongnu.org/gap/pictureframe/index.html. That page talks about it having a clock and some other features. It doesn't have a clock and it doesn't even show images. The webmaster of that site probably copied some TODO file onto that web page without testing if any of the things mentioned there were implemented.