notcurses, as in not ncurses, is a thread-safe library for building complex user interfaces for modern terminal emulators. It is written in C with C++ safe headers. It can be used to create games, image viewers and a lot more. The library comes bundled with a tetris game, a image viewer and a "demo" application that shows of its capabilities.

notcurses can be used to make C++, Rust and Python applications thanks to notcurses wrappers for those programming languages. 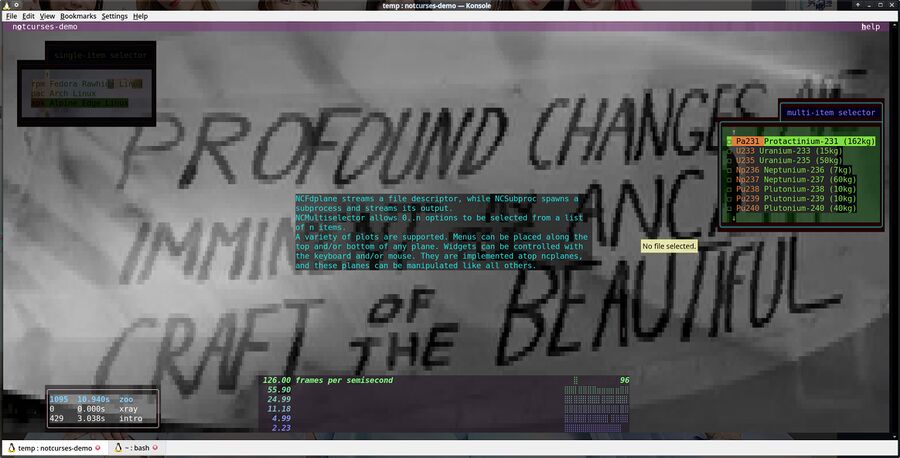 The notcurses library comes bundled with several programs. Some distributions opt to ship them in a separate package called notcurses-utils though they aren't really utilities. The included programs are, as of version 2.5.0:

The primary developer has written a 153 pages long book about notcurses titled "Hacking the Planet (with Notcurses) - A Guide to TUIs and Character Graphics". The e-book edition is available for free at https://nick-black.com/htp-notcurses.pdf.

There is a pretty complete API reference guide available.

Most GNU/Linux distributions have a version of notcurses in their repositories. It is safe to assume that distributions will be able to include your program if you write one with a interface using the notcurses library.

notcurses applications run fine in most modern terminal emulators including konsole, xfce4-terminal and even xterm. It doesn't work very well with screen multiplexers like tmux and screen.