GNOME System Monitor (gnome-system-monitor) is a simple task manager and process monitor made for the GNOME desktop environment. It can show a list of processes, graphs showing CPU, memory and network usage and mounted file systems. It lacks any support for showing I/O load, GPU load, temperatures or anything else beyond the very basics.

The process list has columns showing process name, user, CPU use, process ID, memory use, disk reads and writes and process priority. It can be limited to active processes, your users processes or be set show all processes using the menu. Additional columns such as virtual memory, resident memory, shared memory, CPU time and nice level can be enabled in the settings.

Right-clicking on a process in the process list lets you see what files a process has open or a memory map. The right-click menu will also let you stop, end, kill or re-prioritize a process.

The process list can be shown as a tree by selecting Show Dependencies in the menu.

The Resources view brings up a fairly nice graphical overview of CPU use, including per-core use, memory and swap use and total network bandwidth utilization. Per-interface network graphs are not available. Disk I/O is also not shown, nor is any GPU-related information shown.

The File Systems tab shows a list of mounted file systems and that's all that tab does. It is not at all useful. 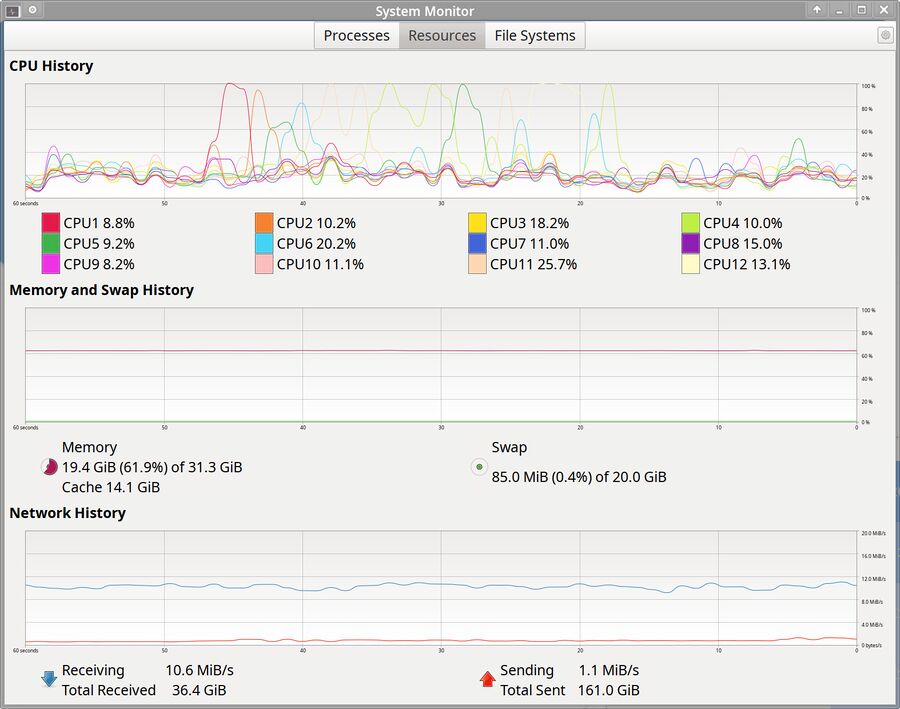 There is no support for plugins or enabling fo additional information such as sensors, GPU statistics or things like that. It is also incapable of monitoring remote systems, the KDE System Monitor is the only graphical process manager capable of doing that.

GNOME System Monitor is an alright process viewer and it does have some nice-looking graphs showing CPU, memory and network use. It is not very configurable, it does support plugins and it does not show any information about disk I/O, GPU utilization, per-interface network information or anything beyond the pure basics.

GNOME System Monitor is fine if you use GNOME and you want to stick with what comes with it, just like the Xfce Task Manager is there if you use Xfce. It is nothing special and not worth installing if you don't already have it. The KDE System Monitor is a more powerful alternative, though it does require plugins or configuration if you want it to show things like disk I/O. The simpler htop terminal program is preferable if you just want a plain process list - but you don't get any fancy graphs.

The GNOME System Monitor doesn't really have it's own website. There is some limited informatoin at wiki.gnome.org/Design/Apps/Usage.