Ecosia web-based German front-end for Microsofts Bing search engine as well as Microsofts Bing Ads advertisement network. It is operated by a for-profit corporation who donates 80% if its profits to non-profit organizations who plant trees. 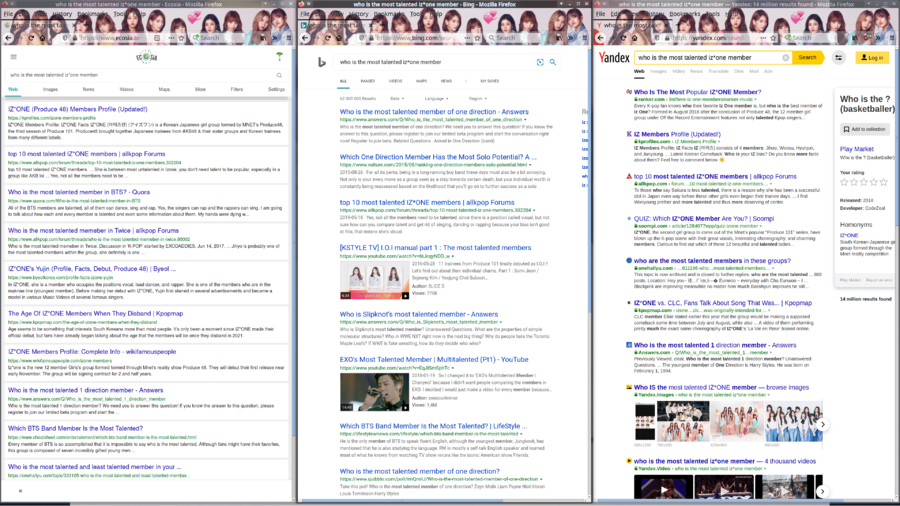 Search results for "who is the most talented iz*one member" from Ecosia, Bing and Yandex.

Ecosia is a metasearch engine with Microsoft Bing as its only source. Ecosia does not have any web crawler or search index of its own. The results are therefore limited to the results the "Bing" search engine feeds Ecosia. Ecosia does apply its own algorithm to the results Bing feeds it and that processing appears to have a positive effect. The top two search results for "who is the most talented iz*one member" on Bing have absolutely nothing to do with the k-pop group IZ*ONE while the top two results on Ecosia do. Neither Bing, Ecosia or Yandex produce the correct answer (It's clearly Nako Yabuki) and Yandex is the only one which comes close. Ecosias algorithm does not do anything in all cases. A search for "is linux better than windows" produces the exact same top three results on Bing, Ecosia and Yandex.

All in all the Ecosia results are basically Microsoft Bings search results ordered slightly better.

Ecosia does not sell advertisement directly. Advertisements are sold and provided by Microsofts Bing Ads[1]. Ecosia is simply one of many partners who are part of Microsofts advertisement network. It is possible to specifically target Ecosias and its user-base. Doing so requires a huge amount of steps and hoops. Most advertisement buyers will simply create a general campaign and have their advertisements display at whatever partnered search engines provide the traffic most relevant to the campaign.

Ecosia story is that they "Don't store your searches permanently" and they "anonymize all searches within one week"[2]. They also promise that they do not sell your data to advertisers. They also claim they do not use any external tracking tools. The lack of third party JavaScript and other third party elements on their website strongly indicates that this particular part of their story does hold water.

"by default Ecosia sets a Bing-specific “Client ID” parameter to improve the quality of your search results. If your browser has “Do Not Track” enabled, we disable the “Client ID” automatically. You can also choose to disable this feature by modifying your user settings."

The simple truth behind their lies, propaganda and excuses is that Ecosia generates a tracking ID which it sent to Microsoft along with all search queries. They may technically not be selling the clientID+searchquery data but they are handing it over to a third party who pays Ecosia to show targeted advertisements. How they generate the "Client ID" is unclear. Generating a hash of something like IP+UserAgent is trivial and matching that to a IP+UserAgent seen by any Microsoft service would be easy to do on Microsofts end.

Ecosia story regarding their CO2 emissions is:

"Did you know that the CO2 footprint of an average search is estimated at 0.2 grams? Not so with Ecosia. We recently built our own solar plant, so that we can run our servers on clean power."

One problem with that story is that Ecosias servers are merely acting as a front-end for Bing. You can run your own Searx-instance on solar power or love and good vibrations and have zero environmental impact on your end (apart from hardware production and its inevitable disposal) and pull search results from Bing and other search engines without any effect what so ever on Microsofts environmental impact.

Ecosia donates 80% of its profits, which equals about 47% of its income, to non-profit organizations who plant trees in dozens of countries. This is a very positive endeavor which does offset some of the CO2 emissions generated by their in practice parent company Microsoft.

Ecosia claims they do not send a "Client ID" to Bing along with search queries if the web browser used is configured to send a "Do Not Track" header along with each request. This can be enabled by going to chrome://settings in Chromium/Chrome. "Send a "Do Not Track" request with your browsing traffic" is hidden under Advanced ▸ Privacy and security. Mozilla Firefox has a "Do Not Track" option under about:preferences#privacy. Using Ecosia is more acceptable if that option is enabled. The fact that they send a "Client ID" along with all search queries to the majority of their users who are blissfully unaware they are being tracked by Microsoft is, of course, inexcusable even if those who happen to become aware of this total scandal get to opt out.

Using Ecosia is, from an environmental perspective, better than using their parent company Microsofts Bing search engine directly. It is also better than using search engines from competitors like Google and DuckDuckGo. Their tracking by default is a concern which makes it hard to recommend it to less computer-savvy people. Using one of the many metasearch engines using Searx and similar free software is better from a pure privacy point of view. The flip-side is that none of the people operating searx instances have any advertisement revenue they can donate to tree-planting projects. Ecosias deep ties to Microsoft means that they do have revenue and they do donate slightly less than half of it to tree-planting.

You may want to consider Ecosia if you are using Google or Bing for the majority of your searches. Just make sure you enable "Do Not Track" in your web browser before you make the switch.