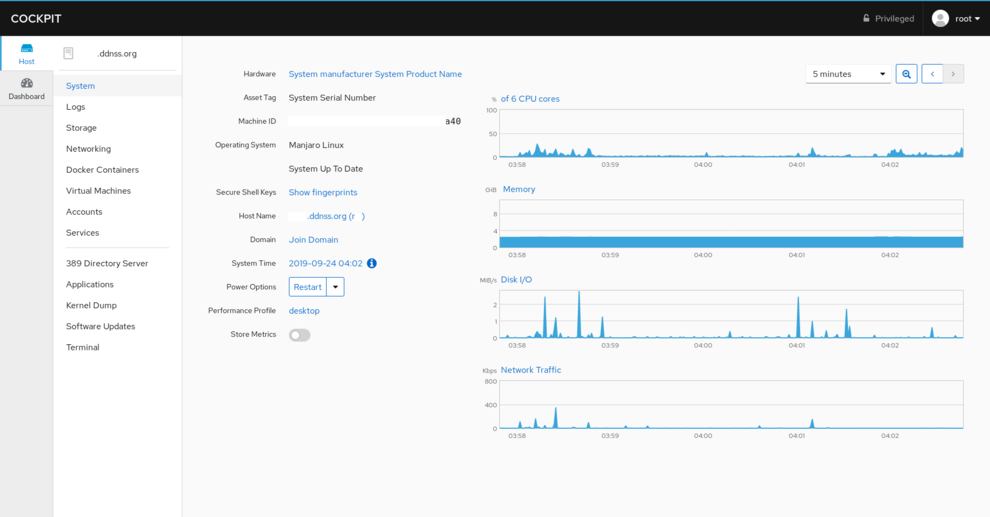 cockpit, found on localhost:9090 in the fox uses latest systemd technology (when unused, does not spend cpu-time) and is legacy free (i.e. supports UEFI boot but not BIOS boot). It is available for several distros including Red Hat (RHEL), Fedora and Manjaro_Linux. In his talks, Lennart_Poettering often recommends cockpit. In the cockpit, you find functions that you already have in the Desktop (for example adding disk partitions) and adds an alternative way to manage those. So some people think it is redundant or even superfluous, but what it really is: It is cool! When you install a Fedora30-server, when finished you will see "cockpit" upon reboot. It is like an ersatz KDE-system-settings for Fedora 30+ server edition.

Some critics ask how they make up the ingredients for cockpit: It is neither all-encompassing nor seem to have any rhyme or reason as to what is and is not included. It is a wildly mixed bag of whatever. Like they throw in another bash-Terminal as if you had not plenty of those already. Most stuff is useful though. It seems focused on new kick-butt systemD functionality, and is somewhat server-oriented thus missing some critical stuff for a local desktop machine. But since it is so advanced in 2019, everyone needs to have it.