Choqok is a microblogging client for Linux with support for platforms using Friendica, open collaboration services, GNU social, Mastodon and pump.io. It works, sort-of, but it is quite buggy as of version 1.7.0.

Choqok is free software licensed under the GNU GPL v3.

We tested version 1.7.0, released February 4th, 2020. This is version may be newer than the version most distributions have available. 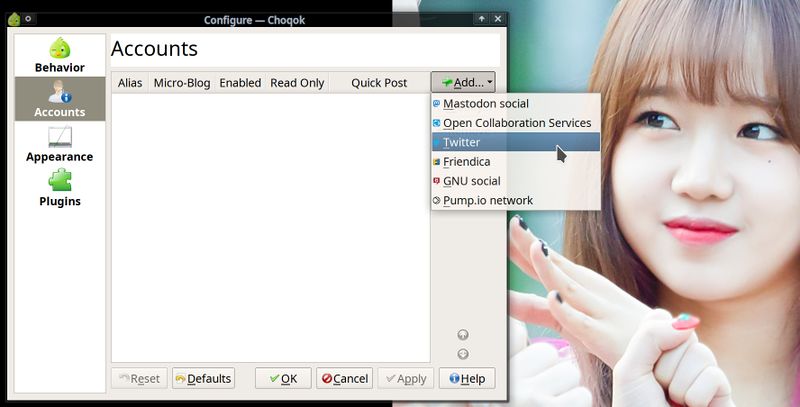 Choqok 1.7.0 will ask you to add some accounts the first time you start it.

Mastodon account setup process is a simple matter of entering your name@instancedomain.tld and clickubg Authenticate with Mastodon Service button. This opens a web browser window where you must login to your account and get a long text string which is then pasted into Choqok. 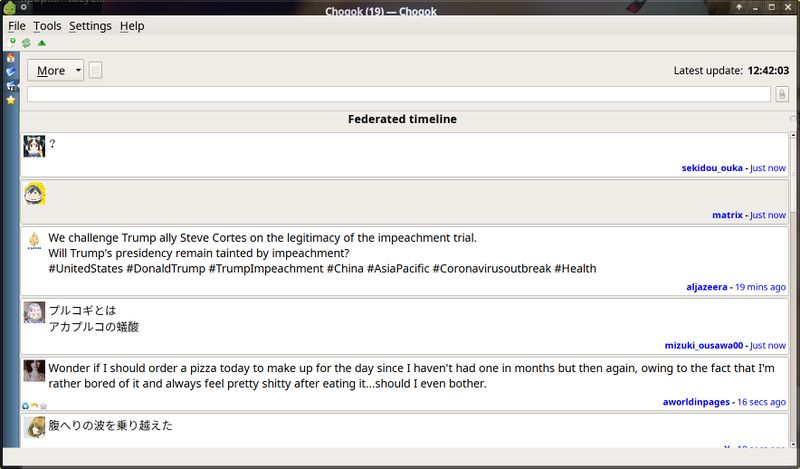 Choqok can show you "You and people you follow", "Local timeline", "Federated Timeline" and "Favorites" from Mastodon instances. The text from posts are show, images and video clips are not. There is no link to media either, media-only posts are show as blank posts. The posts in the timeline do not have any information about their context, nothing indicates if it is a reply to another post or if there is some context. All you get when you use Mastodon is the pure text from posts with no context. 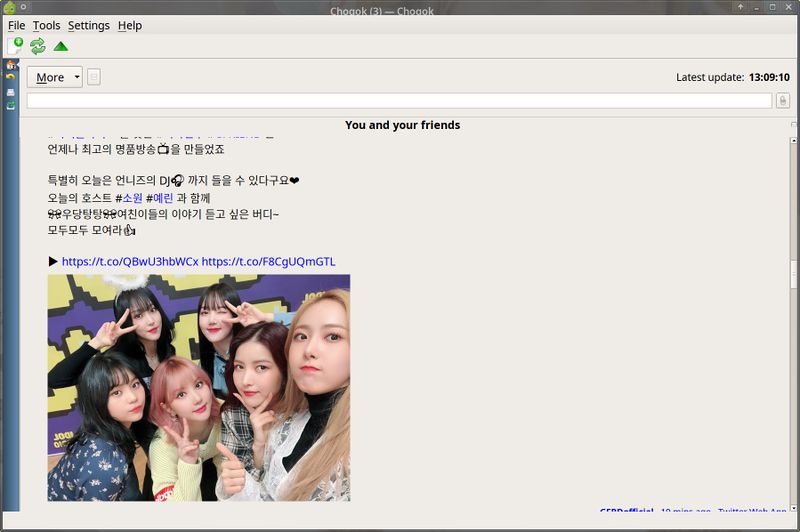 Choqok does show images from Twitter in some timelines. Right-clicking on them does NOT bring up any "Save" button. The lack of support for saving images is a glaring oversight. Choqok can show images so it has them available - it just won't let you save them. Images are not shown if you click a username and select "Show all posts from". They are shown in the "Retweets" view.

There is no support for showing entire threads if a post is a reply to a thread in the main timeline views on Twitter or Mastodon. There is a "Mentions" view on Twitter accounts and posts in that timeline do have a very tiny "Show conversation" button. Clicking it does not actually show the conversation, it just shows the exact same no-context reply in its own window. That feature is not at all useful. Choqok is overall as useless as Twitters website when it comes to seeing posts in the context they were posted.

Choqok has a feature for add images and other media to social media post which does not work. Attaching images to posts on Twitter results in a "Creating the new post failed, with error: Missing or invalid url parameter." error message. Posting images to Mastodon results it in trying to post and failing forever. There is a "Abort" button you can click to get back to the posting field.

Posting pure text works fine on both Twitter and Mastodon.

Choqok is horrible on high resolution interfaces. The icons in the sidebar as well as the icons used to favorite or boosts posts in timeline views are incredibly tiny.

Choqok is probably fine on a 27" 720p monitor where the tiny icons are visible and big enough to be clicked on. It is borderline useless on modern 4k+ resolutions.

Choquk will also crash every single time you exit the program. That is not a huge deal except that it generated as pop-up notification about it crashing.

Removing an account from Choquk makes the application crash.

Choqok could become a good desktop microblogging program. It is absolutely not as of version 1.7.0 released in February 2020. Following conversations with it is impossible, attaching images to posts does not work, it crashes when you close the program and the icons used for basic features like sharing posts are too tiny to be used for practical purposes on modern computer screens.

Using the Twitter and Mastodon websites in a web browser is preferable to using Choqok. It would not take that much to make it a viable alternative.

It has a homepage at choqok.kde.org.