In this chapter we will discuss the use of conditionals in Bash scripts. This includes the following topics:

At times you need to specify different courses of action to be taken in a shell script, depending on the success or failure of a command. The if construction allows you to specify such conditions.

The most compact syntax of the if command is:

The TEST-COMMAND often involves numerical or string comparison tests, but it can also be any command that returns a status of zero when it succeeds and some other status when it fails. Unary expressions are often used to examine the status of a file. If the FILE argument to one of the primaries is of the form /dev/fd/N, then file descriptor "N" is checked. stdin, stdout and stderr and their respective file descriptors may also be used for tests.

Expressions used with if

The table below contains an overview of the so-called "primaries" that make up the TEST-COMMAND command or list of commands. These primaries are put between square brackets to indicate the test of a conditional expression.

Expressions may be combined using the following operators, listed in decreasing order of precedence:

The [ (or test) built-in evaluates conditional expressions using a set of rules based on the number of arguments. More information about this subject can be found in the Bash documentation. Just like the if is closed with fi, the opening square bracket should be closed after the conditions have been listed.

Commands following the then statement

The CONSEQUENT-COMMANDS list that follows the then statement can be any valid UNIX command, any executable program, any executable shell script or any shell statement, with the exception of the closing fi. It is important to remember that the then and fi are considered to be separated statements in the shell. Therefore, when issued on the command line, they are separated by a semi-colon.

In a script, the different parts of the if statement are usually well-separated. Below, a couple of simple examples.

The first example checks for the existence of a file:

To add in your Bash configuration files:

Simple applications of if

The ? variable holds the exit status of the previously executed command (the most recently completed foreground process).


More input> then echo 'That was a good job!'

The same result can be obtained as follows:

The examples below use numerical comparisons:

This script is executed by cron every Sunday. If the week number is even, it reminds you to put out the garbage cans:

With Bash, you can shorten this type of construct. The compact equivalent of the above test is as follows:

Regular expressions may also be used in comparisons:

See the info pages for Bash for more information on pattern matching with the "(( EXPRESSION ))" and "[[ EXPRESSION ]]" constructs.

This is the construct to use to take one course of action if the if commands test true, and another if it tests false. An example:

Another example, extending the one from Chapter 7. Conditional statements, Testing exit status:

We switch to the root account to demonstrate the effect of the else statement - your root is usually a local account while your own user account might be managed by a central system, such as an LDAP server.

Instead of setting a variable and then executing a script, it is frequently more elegant to put the values for the variables on the command line.

We use the positional parameters $1, $2, ..., $N for this purpose. $# refers to the number of command line arguments. $0 refers to the name of the script.

The following is a simple example:

Figure 7-1. Testing of a command line argument with if 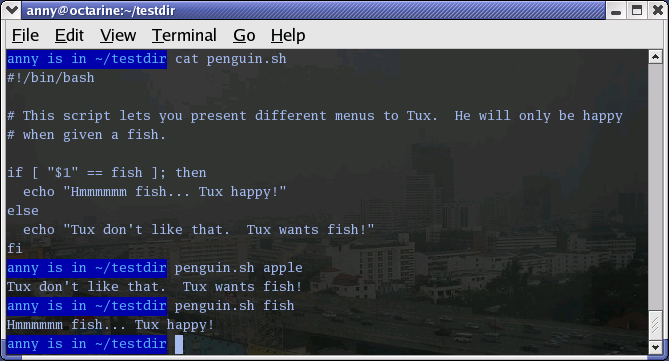 Testing the number of arguments

The following example shows how to change the previous script so that it prints a message if more or less than 2 arguments are given:

The first argument is referred to as $1, the second as $2 and so on. The total number of arguments is stored in $#.

Check out Chapter 7, Using the exit statement and if for a more elegant way to print usage messages.

Testing that a file exists

This test is done in a lot of scripts, because there's no use in starting a lot of programs if you know they're not going to work:

Note that the file is referred to using a variable; in this case it is the first argument to the script. Alternatively, when no arguments are given, file locations are usually stored in variables at the beginning of a script, and their content is referred to using these variables. Thus, when you want to change a file name in a script, you only need to do it once.

This is the full form of the if statement:

This is an example that you can put in your crontab for daily execution:

Inside the if statement, you can use another if statement. You may use as many levels of nested ifs as you can logically manage.

This is an example testing leap years:

We use the double brackets for testing an arithmetic expression, see "Arithmetic expansion". This is equivalent to the let statement. You will get stuck using square brackets here, if you try something like $[$year % 400], because here, the square brackets don't represent an actual command by themselves.

Among other editors, gvim is one of those supporting colour schemes according to the file format; such editors are useful for detecting errors in your code.

Using the exit statement and if

We already briefly met the exit statement in "Testing the number of arguments". It terminates execution of the entire script. It is most often used if the input requested from the user is incorrect, if a statement did not run successfully or if some other error occurred.

The exit statement takes an optional argument. This argument is the integer exit status code, which is passed back to the parent and stored in the $? variable.

A zero argument means that the script ran successfully. Any other value may be used by programmers to pass back different messages to the parent, so that different actions can be taken according to failure or success of the child process. If no argument is given to the exit command, the parent shell uses the current value of the $? variable.

Below is an example with a slightly adapted penguin.sh script, which sends its exit status back to the parent, feed.sh:

This script is called upon in the next one, which therefore exports its variables menu and animal:

As you can see, exit status codes can be chosen freely. Existing commands usually have a series of defined codes; see the programmer's manual for each command for more information.

Nested if statements might be nice, but as soon as you are confronted with a couple of different possible actions to take, they tend to confuse. For the more complex conditionals, use the case syntax:

Each case is an expression matching a pattern. The commands in the COMMAND-LIST for the first match are executed. The "|" symbol is used for separating multiple patterns, and the ")" operator terminates a pattern list. Each case plus its according commands are called a clause. Each clause must be terminated with ";;". Each case statement is ended with the esac statement.

In the example, we demonstrate use of cases for sending a more selective warning message with the disktest.sh script:

Of course you could have opened your mail program to check the results; this is just to demonstrate that the script sends a decent mail with "To:", "Subject:" and "From:" header lines.

Many more examples using case statements can be found in your system's init script directory. The startup scripts use start and stop cases to run or stop system processes. A theoretical example can be found in the next section.

Initscripts often make use of case statements for starting, stopping and querying system services. This is an excerpt of the script that starts Anacron, a daemon that runs commands periodically with a frequency specified in days.

The tasks to execute in each case, such as stopping and starting the daemon, are defined in functions, which are partially sourced from the /etc/rc.d/init.d/functions file. See Chapter 11. Functions for more explanation.

In this chapter we learned how to build conditions into our scripts so that different actions can be undertaken upon success or failure of a command. The actions can be determined using the if statement. This allows you to perform arithmetic and string comparisons, and testing of exit code, input and files needed by the script.

A simple if/then/fi test often preceeds commands in a shell script in order to prevent output generation, so that the script can easily be run in the background or through the cron facility. More complex definitions of conditions are usually put in a case statement.

Upon successful condition testing, the script can explicitly inform the parent using the exit 0 status. Upon failure, any other number may be returned. Based on the return code, the parent program can take appropriate action.

Here are some ideas to get you started using if in scripts: