In this chapter we will discuss:

Getting started with gawk

Gawk is the GNU version of the commonly available UNIX awk program, another popular stream editor. Since the awk program is often just a link to gawk, we will refer to it as awk.

The basic function of awk is to search files for lines or other text units containing one or more patterns. When a line matches one of the patterns, special actions are performed on that line.

Programs in awk are different from programs in most other languages, because awk programs are "data-driven": you describe the data you want to work with and then what to do when you find it. Most other languages are "procedural." You have to describe, in great detail, every step the program is to take. When working with procedural languages, it is usually much harder to clearly describe the data your program will process. For this reason, awk programs are often refreshingly easy to read and write.

When you run awk, you specify an awk program that tells awk what to do. The program consists of a series of rules. (It may also contain function definitions, loops, conditions and other programming constructs, advanced features that we will ignore for now.) Each rule specifies one pattern to search for and one action to perform upon finding the pattern.

There are several ways to run awk. If the program is short, it is easiest to run it on the command line:

If multiple changes have to be made, possibly regularly and on multiple files, it is easier to put the awk commands in a script. This is read like this:

The print command in awk outputs selected data from the input file.

When awk reads a line of a file, it divides the line in fields based on the specified input field separator, FS, which is an awk variable (see Chapter 6. The GNU awk programming language, The output separators). This variable is predefined to be one or more spaces or tabs.

The variables $1, $2, $3, ..., $N hold the values of the first, second, third until the last field of an input line. The variable $0 (zero) holds the value of the entire line. This is depicted in the image below, where we see six colums in the output of the df command: 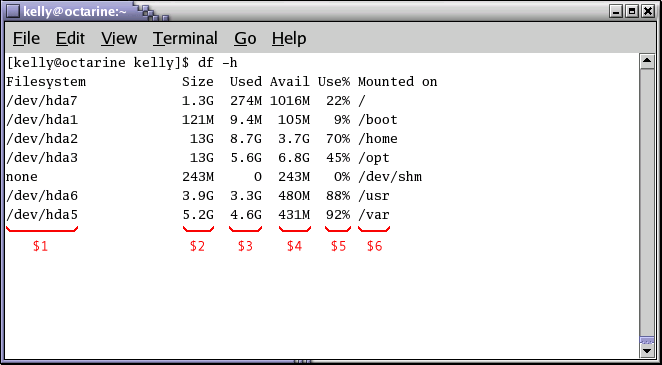 In the output of ls -l, there are 9 columns. The print statement uses these fields as follows:

This command printed the fifth column of a long file listing, which contains the file size, and the last column, the name of the file. This output is not very readable unless you use the official way of referring to columns, which is to separate the ones that you want to print with a comma. In that case, the default output separater character, usually a space, will be put in between each output field.

Without formatting, using only the output separator, the output looks rather poor. Inserting a couple of tabs and a string to indicate what output this is will make it look a lot better:

Note the use of the backslash, which makes long input continue on the next line without the shell interpreting this as a separate command. While your command line input can be of virtually unlimited length, your monitor is not, and printed paper certainly isn't. Using the backslash also allows for copying and pasting of the above lines into a terminal window.

The -h option to ls is used for supplying humanly readable size formats for bigger files. The output of a long listing displaying the total amount of blocks in the directory is given when a directory is the argument. This line is useless to us, so we add an asterisk. We also add the -d option for the same reason, in case asterisk expands to a directory.

The backslash in this example marks the continuation of a line. See Variables.

You can take out any number of columns and even reverse the order. In the example below this is demonstrated for showing the most critical partitions:

The table below gives an overview of special formatting characters:

Quotes, dollar signs and other meta-characters should be escaped with a backslash.

The print command and regular expressions

Slashes need to be escaped, because they have a special meaning to the awk program.

Below another example where we search the /etc directory for files ending in ".conf" and starting with either "a" or "x", using extended regular expressions:

Slashes need to be escaped, because they have a special meaning to the awk program.

Below another example where we search the /etc directory for files ending in ".conf" and starting with either "a" or "x", using extended regular expressions:

This example illustrates the special meaning of the dot in regular expressions: the first one indicates that we want to search for any character after the first search string, the second is escaped because it is part of a string to find (the end of the file name).

In order to precede output with comments, use the BEGIN statement:

kelly is in /etc>

The END statement can be added for inserting text after the entire input is processed:

As commands tend to get a little longer, you might want to put them in a script, so they are reusable. An awk script contains awk statements defining patterns and actions.

As an illustration, we will build a report that displays our most loaded partitions. See Formatting fields.

awk first prints a begin message, then formats all the lines that contain an eight or a nine at the beginning of a word, followed by one other number and a percentage sign. An end message is added.

As awk is processing the input file, it uses several variables. Some are editable, some are read-only.

The field separator, which is either a single character or a regular expression, controls the way awk splits up an input record into fields. The input record is scanned for character sequences that match the separator definition; the fields themselves are the text between the matches.

The field separator is represented by the built-in variable FS. Note that this is something different from the IFS variable used by POSIX-compliant shells.

The value of the field separator variable can be changed in the awk program with the assignment operator =. Often the right time to do this is at the beginning of execution before any input has been processed, so that the very first record is read with the proper separator. To do this, use the special BEGIN pattern.

In the example below, we build a command that displays all the users on your system with a description:

In an awk script, it would look like this:

Choose input field separators carefully to prevent problems. An example to illustrate this: say you get input in the form of lines that look like this:

You write a command line or a script, which prints out the name of the person in that record:

Your awk will give the wrong output for this line. If needed, use an extra awk or sed to uniform data input formats.

The default input field separator is one or more whitespaces or tabs.

Fields are normally separated by spaces in the output. This becomes apparent when you use the correct syntax for the print command, where arguments are separated by commas:

If you don't put in the commas, print will treat the items to output as one argument, thus omitting the use of the default output separator, OFS.

Any character string may be used as the output field separator by setting this built-in variable.

To change the way output fields and records are separated, assign new values to OFS and ORS:

If the value of ORS does not contain a newline, the program's output is run together on a single line.

The number of records

The built-in NR holds the number of records that are processed. It is incremented after reading a new input line. You can use it at the end to count the total number of records, or in each output record:

Apart from the built-in variables, you can define your own. When awk encounters a reference to a variable which does not exist (which is not predefined), the variable is created and initialized to a null string. For all subsequent references, the value of the variable is whatever value was assigned last. Variables can be a string or a numeric value. Content of input fields can also be assigned to variables.

Values can be assigned directly using the = operator, or you can use the current value of the variable in combination with other operators:

The example from "Writing output files" becomes much easier when we use an awk script:

And the command to execute is also much more straightforward when using awk instead of sed:

For more precise control over the output format than what is normally provided by print, use printf. The printf command can be used to specify the field width to use for each item, as well as various formatting choices for numbers (such as what output base to use, whether to print an exponent, whether to print a sign, and how many digits to print after the decimal point). This is done by supplying a string, called the format string, that controls how and where to print the other arguments.

The syntax is the same as for the C-language printf statement; see your C introduction guide. The gawk info pages contain full explanations.

The gawk utility interprets a special-purpose programming language, handling simple data-reformatting jobs with just a few lines of code. It is the free version of the general UNIX awk command.

This tools reads lines of input data and can easily recognize columned output. The print program is the most common for filtering and formatting defined fields.

On-the-fly variable declaration is straightforward and allows for simple calculation of sums, statistics and other operations on the processed input stream. Variables and commands can be put in awk scripts for background processing.

Other things you should know about awk:

1. For the first exercise, your input is lines in the following form:

Make an awk script that will convert such a line to an LDAP record in this format:

Create a file containing a couple of test records and check.

2. Create a Bash script using awk and standard UNIX commands that will show the top three users of disk space in the /home file system (if you don't have the directory holding the homes on a separate partition, make the script for the / partition; this is present on every UNIX system). First, execute the commands from the command line. Then put them in a script. The script should create sensible output (sensible as in readable by the boss). If everything proves to work, have the script email its results to you (use for instance mail -s Disk space usage <you@your_comp> < result).

If the quota daemon is running, use that information; if not, use find.

3. Create XML-style output from a Tab-separated list in the following form:

The output should read:

Additionally, if you know anything about XML, write a BEGIN and END script to complete the table. Or do it in HTML.