bandwhich is a terminal network monitoring utility capable of showing bandwidth use by process and connection on all or a single network interface. It is written in Rust and it has been in development since November 2019. It is capable of showing network use on a single interface correctly but it is wildly off when it comes to special interfaces like bridges and bonds.

"bandwhich" was named "what" until the developer changed its name in January 2020. 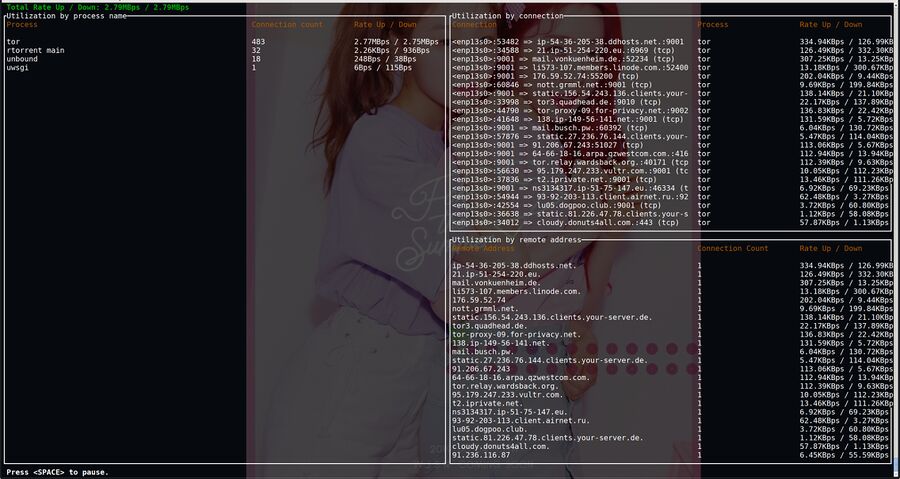 bandwhich v0.10.0 in a small terminal window where only "Utilization by process name" is shown.

bandwhich has three switches who make it show just one of the three panes it is capable of showing:

These switches are useful if you want to have bandwhich in a terminal window which is too small to show more than one pane. They can be combined, bandwhich -a -c will show the address table and the network connection table. 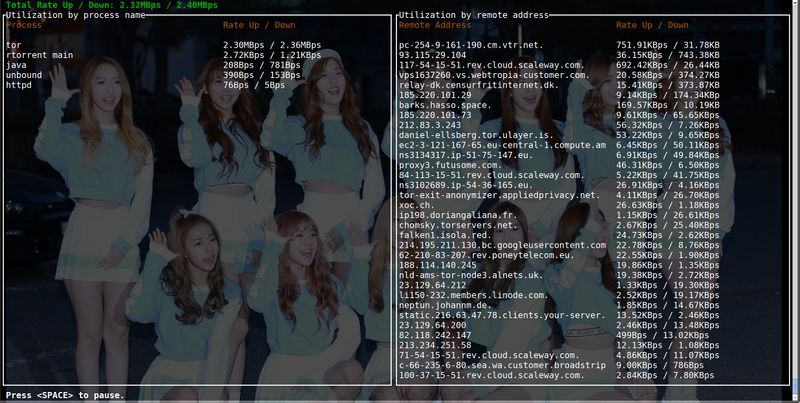 bandwhich will by default show connections on all interfaces, including the loopback interface. It can be instructed to listen on just one interface by specifying with -i interface. bandwhich will do PTR lookups of IP addresses unless you start it with the -n switch.

bandwhich has a "raw" mode which can be invoked with the --raw witch. The raw mode will list network connections as text in a terminal. It is useful if you want to |grep something.

bandwhich does not support switching between network interfaces on the fly, you can either show all or start it with -i interface and re-start it if you want to view another interface.

bandwhich is, naturally, incapable of showing what remote process generated network traffic going through a router. It does, mostly, show local network traffic accurately as long as it is listening on a single real network interface.

bandwhich is totally out of wack if you use it on bridged or bonded interfaces. 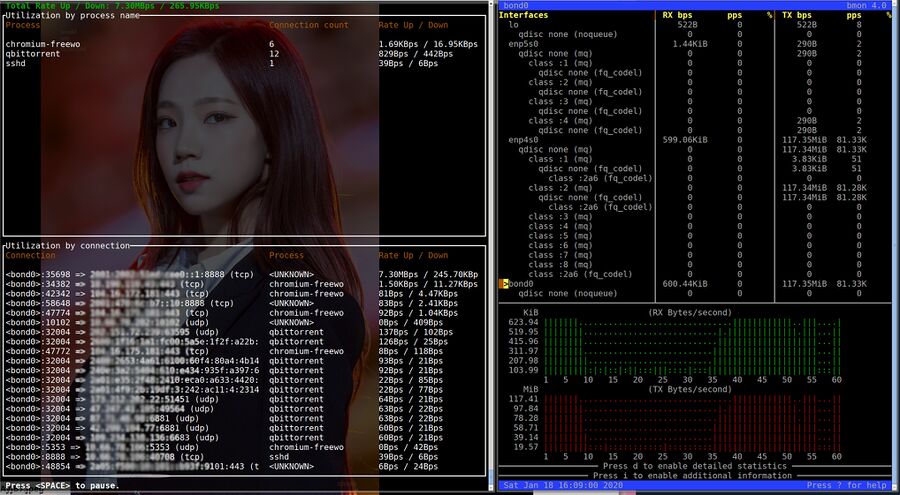 bandwhich - left - has no idea what is going on when it is listening on a bond interface. The accurate numbers reported by bmon - shown on the right - are wildly different from the numbers bandwhich reports.

The bandwidth utilization numbers reported by bandwhich will have zero to do with reality if you use it on bridged or bonded interfaces. Something strange is going on when bmon accurately reports 117.34 MBps up while bandwidth claims 7.30 MBps.

bandwith will place the interface(s) it is listening on in promiscuous mode. Doing so requires root privileges.

bandwhich is a interesting project which fills a void in the existing network monitoring tools available for GNU/Linux machines. bmon is excellent if you want to view total network activity on several interfaces but you can't see per-process connection. Running bandwidth is much simpler than getting the same kind of data using tcpdump and a long list of parameters.

bandwhich is currently only useful if you are using a simple standard network setup, which is too bad. It is utterly useless if you have a more complex setup (bonds, bridges, etc). That limitation will hopefully be fixed in a future version.

bandwhich is a rather new program (in development since November 2019). Very few distributions carry it in their repositories. There is a copr repository for Fedora and packages for Arch, NixOS and Void. Installation instructions for those are on the bandwidth github page.

bandwhich can be installed on any distribution by checking out the source with git clone https://github.com/imsnif/bandwhich.git and compiling it using the cargo build tool and package manager for Rust applications.

Running cargo build will compile bandwhich (and leave about 200MiB of things in $HOME/.cargo) and make a binary available in ./target/debug/bandwhich

Running cargo install bandwhich will compile it (even if you already did) and produce a static binary in ~/.cargo/bin/bandwhich. You can simply copy or move that binary to /usr/local/bin or somewhere else in the root users path if you want to run it as root.

bandwhich will not run under a regular user-account unless it has been given elevated privileges. Those can be given to it by running

as a user or

as root (if you put it in roots path). It is possible to run bandwhich as a regular user once you have done that (This will only work on Linux, macOS users have to run it using sudo).