bmon is a simple terminal program which allows you to watch graphs showing network traffic and other network information. It can also show a detailed view with all kinds of network statistics. It is light with few dependencies. It is a simple, handy and easy to use network monitoring tool. 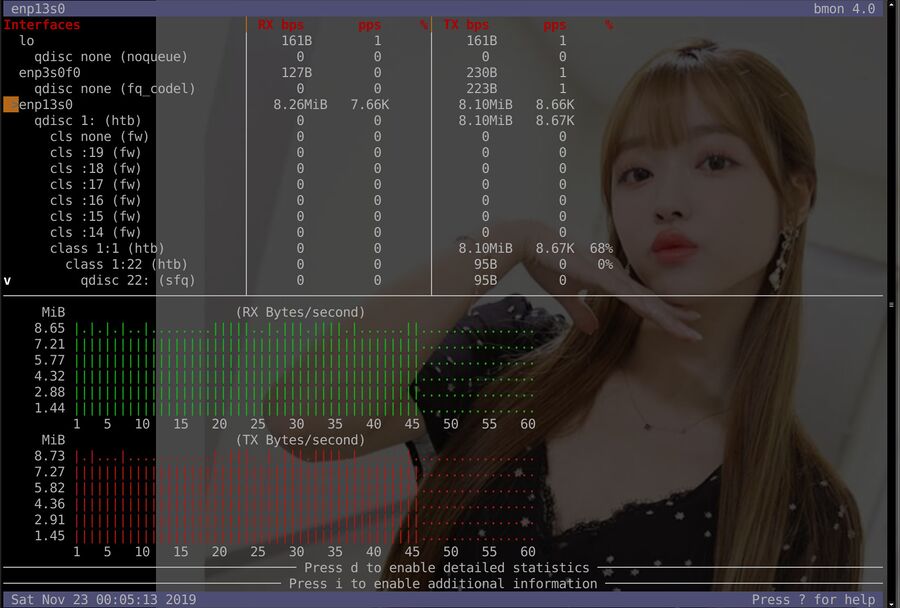 Starting bmon with no arguments starts it with it's curses interface. That's what you want most of the time. There is also a ascii "interface" available with -o ascii - that mode will just dump a list of network interfaces and their traffic to the terminal (no nice graphs).

The pretty default curses interface will show a list of network interfaces and their traffic with graphs indicating incoming and outgoing traffic on the bottom. The d key activates a detailed view with all kinds of incriminating information such as multicast packets sent and received, CRC errors and a whole lot of other details which may be useful for debugging purposes.

The graphs on the bottom will by default show throughput per second. The Tab ↹ key can be used to switch between seconds, minutes, hours and days.

The up and down arrow keys can be used to switch between a machines interfaces.

The right and left arrow keys can be used to change the graph from it's default RX bytes and TX bytes view to Packets/second, RX Abort Errors, RX Collisions and a few other things. The default RX/TX bytes view is the only generally interesting graph; the rest are not at all interesting unless you are debugging or troubleshooting.

bmon's defaults can be configured using the files /etc/bmon.conf and $HOME/.bmonrc. There is no reason to touch those files.

The bmon manual page lists some command-line options you won't need but not the curses navigation keys. It's not very interesting. 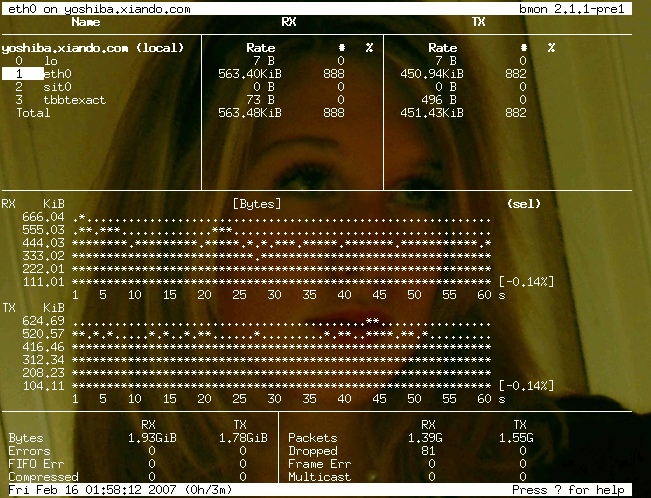 Most GNU/Linux distributions have a old version of bmon available under a package which is simply named bmon. It works but you are better of going directly go the git source. Version 4.0 has colors; version 3.6, which is included in CentOS, and older versions are limited to black and white.

Installation from source on Debian, Ubuntu and Linux Mint is as easy as:

and installation on CentOS and RHEL:

You could, alternatively, get the "Latest Release" tarball from the closest thing bmon has to a homepage at github.com/tgraf/bmon. git hasn't been updated in years as of late 2019 so it is unlikely that there is any difference.