AmphetaDesk is a long outdated RSS newsfeed HTML-generator and a simple web-server. Development stalled back in 2002.

Amphetadesk runs as a daemon and it's generated RSS feed summaries are available at a local webserver running on http://127.0.0.1:8888/. The idea is kind of neat, but it does give you yet another daemon running, where as stand-alone RSS readers such as Liferea don't use resources when you're not using them. 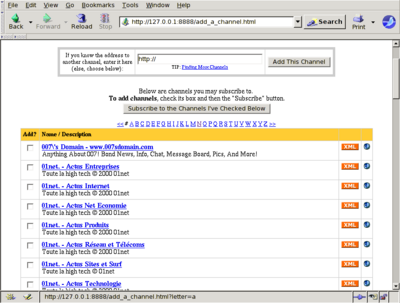 AmphetaDesk gives you a huge selection of RSS streams to choose from. You can search for RSS feeds, but you can't search the actual content of RSS streams

AmphetaDesk is made in perl and it's "open source" under the "Artistic License". It uses templates, and the source is clean enough to use as a basis for something like yet another web-based RSS-reader service.

As a stand-alone RSS reader

Amphetadesk is kind of neat, specially when you consider that it - apparently - has not been developed since 2002. Regardless, it does lack some features, such as the ability to search RSS streams. It really does have some signifficant lacks compared to stand-alone RSS reader applications. The idea is kind of .. cool, and unique, and the code is likely of interest and value to perl-programmers, but Amphetadesk isn't something you'd put on your old mothers computer to give her easy access to the latest headlines.