You you want it

If you want to download videos of teens hired by multinational corporations to pretend to be "average" teens and talk about nothing while promoting their products then the shell script youtube-dl is for you. If you prefer a nice graphical userinterface to opening a terminal where you write

then Youtubedownloader is for you. The GUI can also ask mencoder to convert the videofile after it's downloaded.

KDE Kommander scripts are just simple scripts, not "typical" source code, the tarball only contains a .kmdr file and a .svg icon (and a copy of youtube-dl). You must install by copying the files (after the script is made usable as of 0.2.3).

It is essential to note that Youtubedownloader version 0.2.3 contains this:

This code may seems plausible at first blush. However, a close-up inspection reveals that close to nobody has their youtube-dl (which is requird) installed in the path "/usr/share/youtubedownloader/". Thus; official v0.2.3 is broken and you have to change line 445 to:

There is no ".desktop" file in the v0.2.3 source code and you therefore have to start this thing manually with

or create a menu item for it yourself. 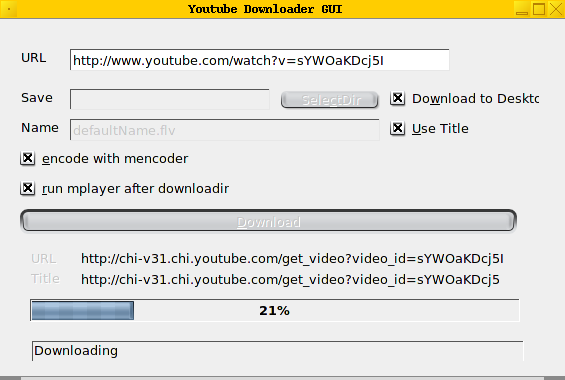 Youtubedownloader is a nice product which is probably handy to have installed, and it does seem very girl-friendly with it's easy to use dialog box. You only need this if you don't like using the shell, though. Writing youtube-dl url probably takes way less time than finding some GUI in some menu.