The usenet is an old (start in 1980 with peak in September 1993) and a somewhat hyped webforum-like thing for use with e.g. Thunderbird . Usenet also offers an up- and download repository for binary files, known as alt.binaries which consists of fragmented residue often times. So downloaded video files will not play at all, unless you happen to find a complete .nzb collection. Usenet has stuck with the technology of year 1980 software very much and even shirks technology like HTML except in designated areas such as news://news.neodome.net/alt.post-in-html.only

Usenet does not refer to any type of physical network or internetworking technology; rather, it is a logical network of users. That logical network has evolved from UUCP data transfers to NNTP and TCP/IP, but Usenet itself is the same. Usenet predates NNTP.

Enter the usenet yourself

To get into the usenet, use Mozilla Thunderbird to

, for example as the Thunderbird Start Page Location (see pic below), preview at https://alt.home.repair.narkive.com. Since neodome is a free nntp-server with read & write access, you do not need any password nor creditCard number to get going. Just get into usenet hassle-free. 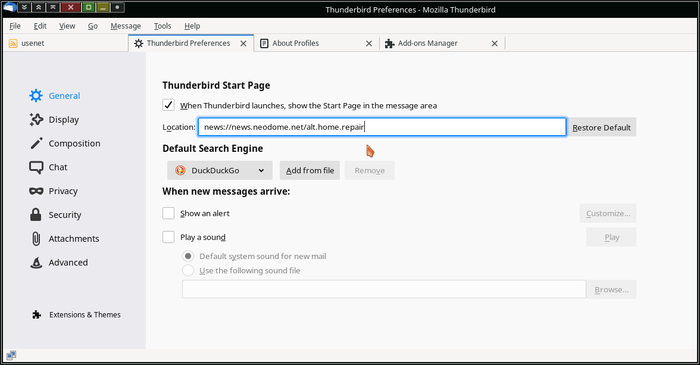 You now may have to restart Thunderbird two times so neodome becomes visible. Then subscribe some newsgroups via the menu and post something interesting about how you repaired your home or whatever.

In a KDE Linux, you can alternatively launch this bash line:

Usenet, based on NNTP, predated the WWW, based on http, by about 10 years. In fact, the invention of www was announced first on usenet. With commercial usenet providers you get 100'000+ newsgroups, of which 99,99% are completely dead of course. Many if not most newsgroups died between 2000 and 2010 by the latest. Most usenet traffic concentrates in 20 - 50 newgroups. Below rank 50, newsgroups in 2020 hardly see 3 postings per year.

The main purpose of usenet is to discuss news, NNTP and the usenet itself, for example on https://news.misc.narkive.com

Most webpages that try to explain usenet fail miserably and contain dead links mostly. One such half-baked example misses the point and resorts to gibberish a lot of times.

Setting up the usenet indexer "newz nab" (just some NZB search engine running on a local Apache2) is very time-consuming and will hardly yield any benefit at all other than showing error messages. Hence most pages with NewsNab have died ages ago.

Usenet was started in 1979 as "UNIX User Network" by two dudes from the Carolinas, USA.

Each index varies in its completeness, ease of use or lack thereof, range of filters, speed, and number of searches allowed per day for free users. Couchpotato and Sickbeard users will need an indexer that offers an API key, which mostly require an expensive $$ account registration.

NZB indexes are used to find files or fragmented parts of files on the Usenet and hopefully download them (usually fails after some hours of waiting) using a newsreader app. To download the files listed on them, you’ll also need to subscribe to a Usenet provider and pay huge amounts of money to them.

Usenet has become a commodity exploited in many rip-off schemes. Some vendors charge hundreds of € / year and more for almost nothing in return - but where you pay 30% or more in affiliate bonuses alone. Hence the aggressive and often misleading marketing of usenet employing many vague buzzwords and very little substance. No one will tell you where to find free and open usenet servers such as news.netfront.net.

Only few vendors bring themselves to "allow" you to pause payment during holiday season, others keep ripping you off while you are off-usenet. Much fragmented filez stuff is incomplete and worthless, bittorrent is far superior. Some vendors of block-type access (rather than the "pay each month" rip-off) do not say after which time your bloc-type account, say with 1 Terabyte with 100 Mbit speed at 50 € , expires. Others say it is valid for 10 years or longer. Some sell a 1 Terabyte block which expires after 12 months already. A huge rip-off!

To overcome the inherent alt.binaries file fragmentation, super complex web-warez are needed, which fail and break a lot and are hard to understand.

So people resort to just post from a 40 lines Bash + Python script (20 lines of which are the actual news-article to be posted) without any other "client tool" of dubious provenience.

Without paying into some rip-off scheme, you will not be able to upload onto alt.binaries but you might download with reduced speed for free. It is worth noting that those usenet binary group vendors also usually offer tons of non-binary newsgroups. Those may date back into the 1990 years, when users posted into BBS’es via audio-modem and UUCP or used mail-to-news gateways, such as FIDOnet. There are thousands and thousands of such local newsgroups full of posts like 30 years old. So it may be cool for nostalgia-minded people to get themselves a free usenet account and look up that old stuff.

The cheapest traffic blocks are 1 € for 10 GByte with paypal and you can find partners on the usenet to share it with (like 3 users or more). A VPN or other anonimity scheme may be helpful for all partners. You can arrange for account sharing right here in the usenet discussion page.