Terminator is a terminal emulator based on an old version of GNOME terminal which lets you easily meaningfully arrange arranging multiple virtual terminals in a grid within window. It has a really handy feature which stands out as unique and practical: It allows you to type in one terminal and send the keystrokes in that terminal to either all the open terminal windows or just the terminal windows within a tab. The rest of its feature-set is on par with other modern terminal emulators.

Part of Terminators "About" dialog box. 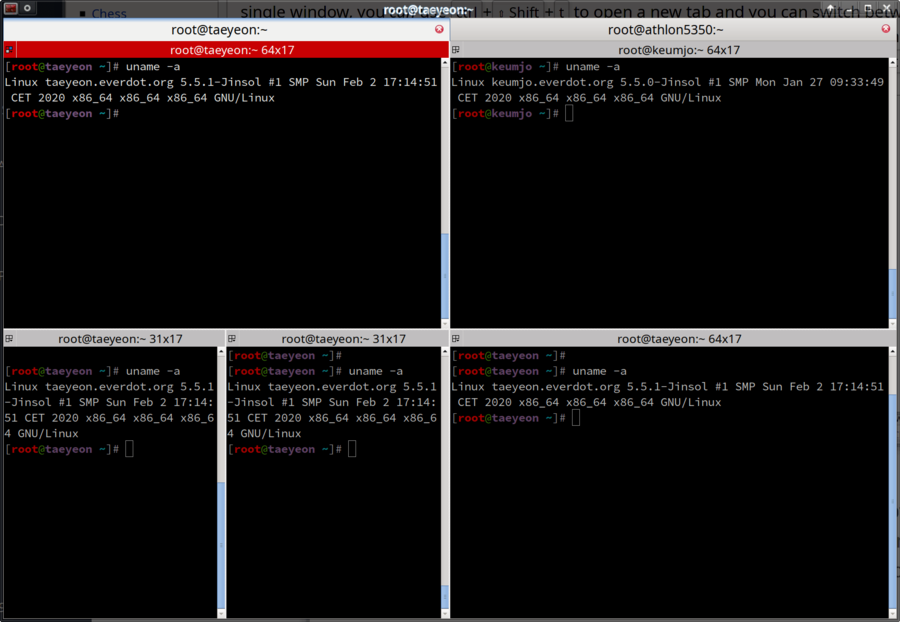 Terminator has a very handy broadcast to all feature which sends keystrokes to either all terminal windows (including other tabs) which can be activated with alt+a. alt+o turns broadcast to all off, pressing alt+a again when it is activated does not.

Terminator has all the regular features you find in other modern terminal emulators. Transparency is supported, tabs are supported, profiles with different fonts and colors are supported and so on. Window layouts can be saved and attached to stored profiles.

Keybindings are configurable in its Preferences. The default are mostly identical to the default keybindings in other terminals. The Preferences window is otherwise filled with all the options who should be there. The tab view can be placed on the top or bottom or be hidden. Focus can be set to "follows mouse" or "click to focus" (default). It supports custom URL handlers, etc. There is an option for making the window borderless but that one doesn't work, it is probably desktop or theme dependent.

Terminator is also fine as a regular general-purpose terminal. It has everything other terminals have (with the exception of KDEs konsole which do have more features) so you won't miss anything if you decide to use it as your only terminal.

Terminator doesn't really have a homepage. It does have a blog at gnometerminator.blogspot.com and a Launchpad development page at launchpad.net/terminator. The terminator manual page has not been updates since 2008.