There are quite a few options for sharing that album your and your band recorded so you can gain some fame and free publicity. The most widely used peer to peer system is the BitTorrent protocol. That is not the only option, there are many others. There's a run-down of the available software grouped by what kind of network they are for.

The most commonly used: BitTorrent

BitTorrent is a file-sharing system where files are either identified by a file hash which can be search for by BitTorrent software in order to find peers or special files with the .torrent file extension. It's one draw-back is that there is no decentralized global search-function, you can not simply type in Ubuntu and get ISO files for that Linux distribution. You will have to go to a special websites in order to find files. See our article BitTorrent clients compared for a comparison of client software you can use with this protocol.

The most technologically sound: GNUnet

GNUnet is a secure encrypted peer to peer overlay network with support for file-sharing and many other services in addition to files. We only mention this because it is free software and the technology is really good. It has been in development since 2001.

The main and dealbreaker problem with GNUnet is that despite it's superior technology it's only got something like 200 users globally. There's very few files shared on it and there is nobody to download your files if you choose to share some.

You can read more about this network at https://gnunet.org/en/

Direct Connect is a file-sharing protocol which, despite it's misleading name, relies on a group of people connecting to one or more central hubs. Everyone uploads a list of their files to the hub. The hub makes an index of all files available at users connect to it and users can search the hub and find files. These files can then be downloaded directly from other users; that is where the "direct" part of the name comes from.

Direct Connect was very popular for a time and then it sort-of just died off with the advent of BitTorrent. There are still hubs and people using it. For GNU/Linux users it's now a non-starter.

Direct Connect is generally not very exciting since the amount of people using it has been dwindling for a decade. 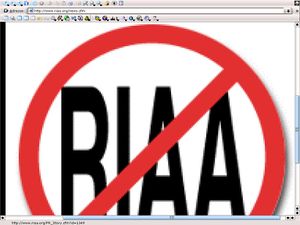 Anti-piracy organization RIAA's website July 2004. They said they were "hacked" but in reality they left their admin interface open on a high-numbered port with no password or authentication required. That was their "security".

EDonkey2000 was a popular peer to peer client in the early 2000s which relied on central servers. It was shut down by RIAA in 2006. The protocol lived on as ED2K and various clients and servers using the protocol sprung up. These had the same fatal flaw as the orignal EDonkey2000 network: It all relied on centralized servers.

Kademlia is a distributed database which solved the central-server problem for peer to peer software using the ED2K protocol. Clients using the Kademila network use that protocol to find other peers and content on the network. The original ED2K protocol is still used to transfer files between members of the network.

amule appears to be the best choice for accessing the Kademlia/ED2K network since it's.. the only client that is readily available in major distributions repositories. It is also the only client which actually run on GNU/Linux and compiles.

We are researching other file sharing networks and software available for them. There does not appear to be many viable alternatives for sharing Linux ISOs but there could be some and new ones could pop up in the future.