Kopete is an outdated advanced multi-protocol, free software instant messaging client built using the KDE libraries. It allows you to talk with friends on mostly formally popular messaging networks from one program. It has a Off The Record (OTR) encryption plugin which can be used on top of the messaging services it supports for additional security. Kopete was very popular and useful a decade ago. As of 2019 it's not very useful and, in some ways, outdated.

The welcome wizard for setting up accounts quickly reveals that Kopete has fallen severely behind the times. 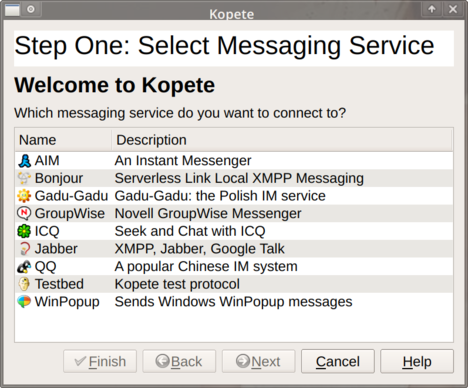 The supported messaging protocols are:

The only useful protocol supported by Kopete would be XMPP. That's it, it's gone from being a useful multi-network client to a Jabber client.

The lack of support for modern messaging networks is apparent. There is no Matrix support, Discord support, Telegram support or support for anything else all your friends are using. This severely limits Kopete's usefulness. Kopete used to support a lot more networks. It would appear discontinued services like MSN were removed when those networks died but the newer ones replacing them were never added.

Kopete does come with a lot of plugins which can enabled[1]. These are:

The OTR Off The Record protocol for encrypted chat over other insecure protocols is the most useful of the supported plugins. It is, like the rest of the plugins Kopete supports, not at all useful since the program itself doesn't support any modern protocols.

Development of Kopete has stalled. The KDE program "Telepathy" was said to be replacing Kopete back in 2011-2012. That may have been someone's plan but development of Telepathy appears to have stalled back in 2015. It never really went anywhere.

Kopete has pretty much been reduced to being an average XMPP/Jabber client. It lacks support for anything your friends would be using. It's probably fine if you want a XMPP client.

It's a bit sad that Kopete has fallen behind the times to the degree it has. The program itself is sound and it would be quite nice and useful if it got support for some additional protocols like Matrix.