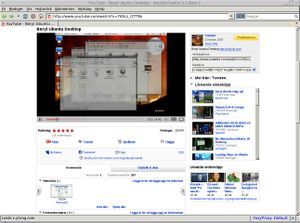 Gnash is a free browser plugin and stand-alone player meant to play Adobe Flash files. It is released under the GNU General Public License and it is a "high priority" FSF project. It loves to spend 100% of your CPU time doing mostly nothing. It does not even play flash video at big sites like YouTube and fails horribly at playing most other content. Gnash has not been updated since 2012.

It plays mostly nothing, specially not flash games. The homepage gnashdev.org is down and its bad care to still offer the installation by package manager. It is crap.

Gnash loves to use the CPU and it really loves to use all of it. It loves using CPU so much that it continues to do so long after you close the browser tab or window where a flash object was playing.

It appears that the opengl rendering is specially CPU-hogging and it makes gnash so slow that it is impossible to play videos close to smooth when opengl support is compiled in. It also seems that using the Anti-Grain Geometry (agg) rendering engine is a very good idea.

Ubuntu users have reported that gnash slows their systems down to the point where they become unusable. Ubuntu users may want to compile gnash themselves rather than use the official packages.

The Fedora Project insists on using the gstreamer backend due to some local patent laws in the fascist US regime. Distributions outside that corporate two-faced one-party-system police state appers to prefer using ffmpeg over gstreamer -- and the performance of ffmpeg is typically better.

If you find that your computer is slow as hell, even after closing the web browser, then you will probably find that Gnash has left 10 processes running at 100% CPU by checking top or ps aux.

Gnash development was initially headed by software developer John Gilmore. Is is still part of the project. Rob Savoye is the current project head.