The GNU Midnight Commander (mc) is a text-based console file manager. It is easy and efficient to use and very powerful. It supports mounting remote file-systems using protocols like sftp and samba. It has a traditional two-folder view with a row of function shortcuts on the bottom. It is second to none when it comes to file-management (except perhaps mv/cp/rm in a pure shell). 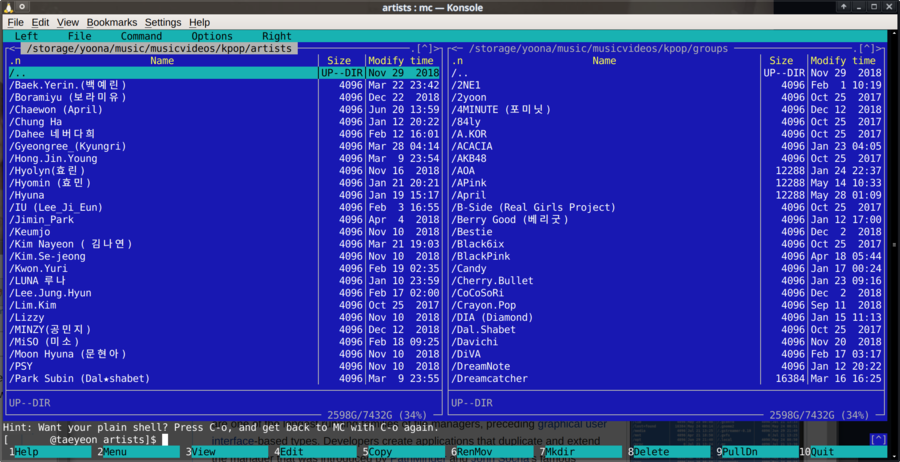 mc is made for really quick keyboard navigation. It can be used with a mouse but it's most efficiently used with a keyboard. Navigating through folders and folder trees is quick and efficient.

Selecting files can be done by pressing ins or + on the number-pad. The latter brings up a dialog box where you can select files based on shell patterns. Copying or moving files is done by the function keys, which should be used is indicated on the bottom row.

The GNU Midnight Commander is really efficient for moving files between folders. There isn't anything quite as nice if you need to move say 10 types of files form a folder like Downloads/ into ten other folders.

mc can be used to launch files into programs too. Pressing Enter on a .webm will open it and play it. However, that's not really where it shines and a graphical file manager is better for that kind of use.

mc can open and use remote file-system attached with ftp, fish (shell link), sftp and samba.

One pitfall you may run into if you build it yourself is that ./configure defaults to --enable-vfs-smb=no. You will not get to mount Samba shares unless you explicitly demand that functionality.

When you're on remote filesystems

mc's text-based nature makes it the obvious choice for file-management when you've ssh'd into some remote box and need to organize some files on it.

mc supports using a wide range of archives as if they were normal folders. Just press enter on a tar.bz2 and mc will happily enter it as if it's just another folder thanks to it's built-in virtual filesystem support. One minor annoyance is that entering very large archives can be a bit slow. However, the feature is practical if you need to pull just a few files from an archive with a whole lot of files.

Graphical file-managers are nice and have their purpose. They are fine if you want to drag one file into some other folder. Opening a terminal mc is so much quicker when a larger number of files need to be organized and/or moved around. It is simply above the competition for that kind of use.

There is something close to it in the graphical world: GNOME Commander is in many ways the exact same program except that it is made with GTK and runs in X instead of a terminal.

GNU Midnight Commander is absolutely worth a try if you are unfamiliar with it. It is in many ways the ultimate file-manager.

MC was first released all the way back in 1994. It is therefore rather feature-complete and not in need of major development. Maintenance releases are typically released twice a year with version 4.8.23 being released on June 23, 2019.