GLtron is a 3D light cycle version of the snake games who were popular in the early 1980s. Is is named after OpenGL and the movie Tron which inspired the game. It was originally released in 1999 and it has not changed all that much over the years. The graphics is simple and the gameplay is not at all exciting. 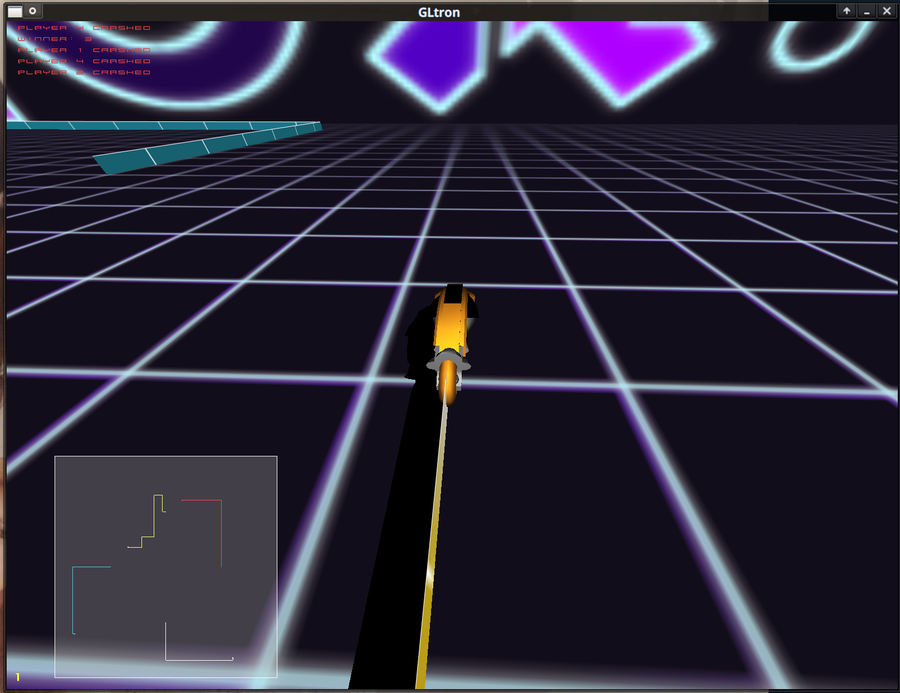 GLtron's graphics isn't very good. It's rather basic. It is a 20+ years old game and it shows. It may or may not have been impressive when the game was releases but it just ain't anywhere near what you expect from a modern or even an older game.

The gameplay isn't very exciting. It is, after all, just a simple snake game with basic OpenGL graphics. The keys a and s are used to turn left and right. And your options when it comes to moving around. The keys q and w can be used to view the light-cycle from the sides.

The plot is as follows: Your bike leaves a trail - just like in the classic snake games. There is a computer opponent and that bike's also leaving a trail. You want to make the opponent crash in your trail and not crash your own bike. It is fun for 5 minutes and then it gets old.

There is music. It's .. what you would expect from an arcade machine in the 1980s. It can be turned off.

GLtron will by default start in a very window with tiny resolution which is unsuitable for modern monitors. It has command-line options which can be used to start it in various higher resolutions. These are:

The defaults can apparently be configured in the file $HOME/.gltronrc which it looks for but nobody knows how to configure using this file.

GLtron is not a very fun game, the graphics is very simple and the music is mediocre. The game is free and available in all the distributions repositories. You can try it and play it. Don't expect much in terms of excitement.

GLtron also has the drawback of starting in a window with a really low resolution unless you apply a command-line switch or make a custom .desktop file for it. That was a fine way of doing things 20 years ago. A way of configuring this from within the game would be preferable.