All the machines were setup with Fedora 31 with either kernel 5.4.14 or 5.5 rc7. Mesa version 19.2.8 was used on all machines. That Mesa version does not perform as well as the current git snapshot of what will be released as Mesa 20 in a few weeks. Mesa git is sometimes not as stable as the releases are so we opted to use the Mesa version in the standard Fedora repositories.

The browsers we tested were:

All the browsers were tested with clean default configurations. It is possible to mess around with about:config in Firefox, SeaMonkey and Pale Moon and chrome://gpu in Brave and Chromium to increase (or decrease) performance. These tests were done with no tuning and no browser extensions, not even themes.

The first of the tests, Webexprt 3 from Intel-funded Principled Technologies, has Pale Moon, and the upcoming SeaMonkey 2.53.1 (we tested beta 1) and Firefox as the winners with all of those web browsers outperforming Brave, Chromium and GNOME Web on all machines. 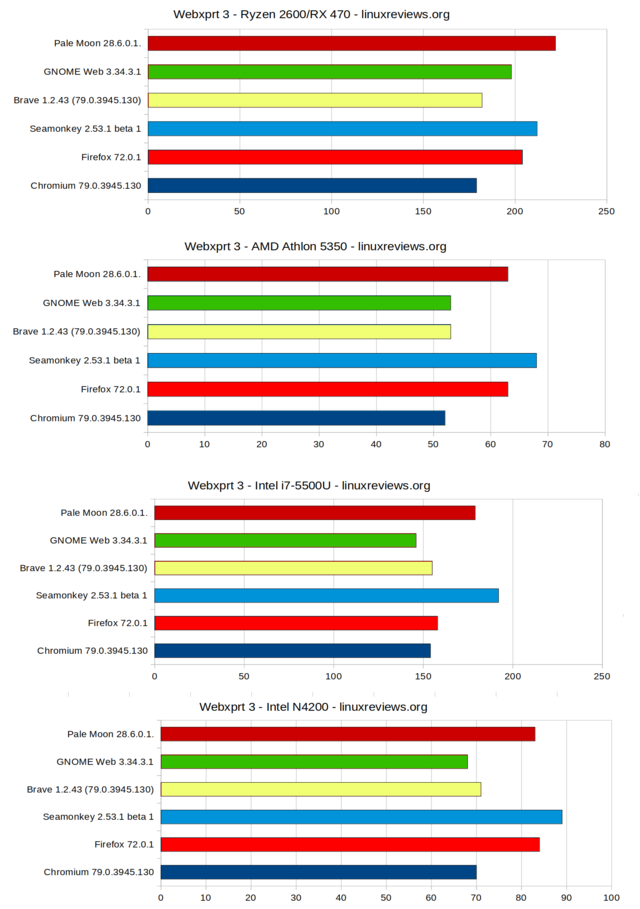 GNOME Web performs similar to Brave and Chromium in this test. It uses WebkitGTK which shares the same roots as Chromium's "Blink" engine which is why the results are somewhat similar.

The Basemark Web 3.0 test at web.basemark.com paints is very different picture of the browsers performance. That test puts more weight on WebGL performance. That is an area were Chromium and browsers based on it shine. Firefox and browsers sharing its codebase have had horrible OpenGL performance since forever and that is still the case in the latest versions of all Gecko-based (and derivative) browsers. That explains some of the difference, but not all. GNOME Web is incapable of finishing this particular benchmark.

Brave, followed by Chromium, are far ahead of the competition in the The Basemark Web 3.0 test. 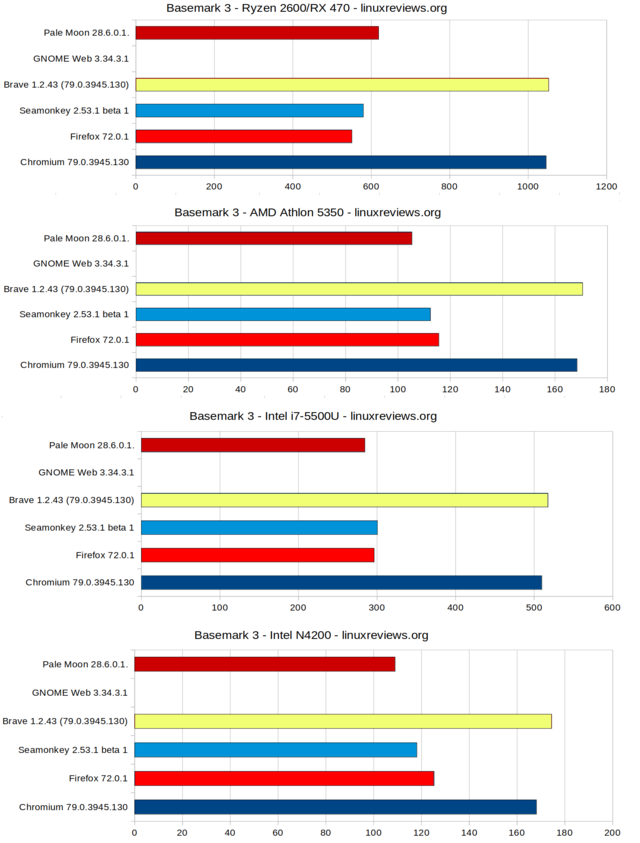 It is interesting to note that Pale Moon is ahead of the other Gecko-based browsers on the most powerful machine in the test yet it is the slowest on the three other systems.

The Unity WebGL 2018 benchmark results provide some insights which largely explains why there is such a difference between the results from Webxprt3 and Basemark Web 3.0.' It is a pure WebGL and WebAssembly benchmark which does not try to simulate real world use scenarios. It tests raw WebGL performance and that's it, that is all it does.

Pale Moon could not participate in this test due to its intentional lack of support for WebAssembly. 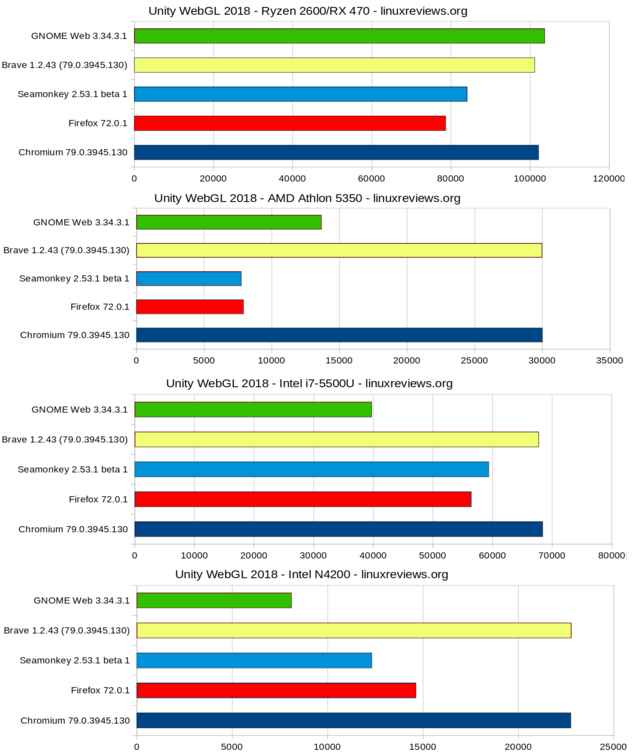 Brave and Chromium provide much better raw WebGL performance than the Gecko-based browsers. The performance-gap appears to depend on the hardware, the difference is huge on the Athlon 5350 APU, big on the Intel N4200 and not that significant on the much faster Ryzen 2600 with a RX 470 GPU. It is interesting to note that GNOME Web wins the Unity WebGL 2018 test on the fastest machine even though it is way behind on all the other machines.

JetStream 2 is a syntetic benchmark which tests raw JavaScript and WebAssembly performance in a number of areas. Pale Moon and SeaMonkey do not get to participate in this benchmark. Pale Moon lacks WebAssembly support. SeaMonkey should be able to complete this test but it doesn't, it stalls at the async-fs part of that test suite. That leaves four of six browsers able to complete this test. 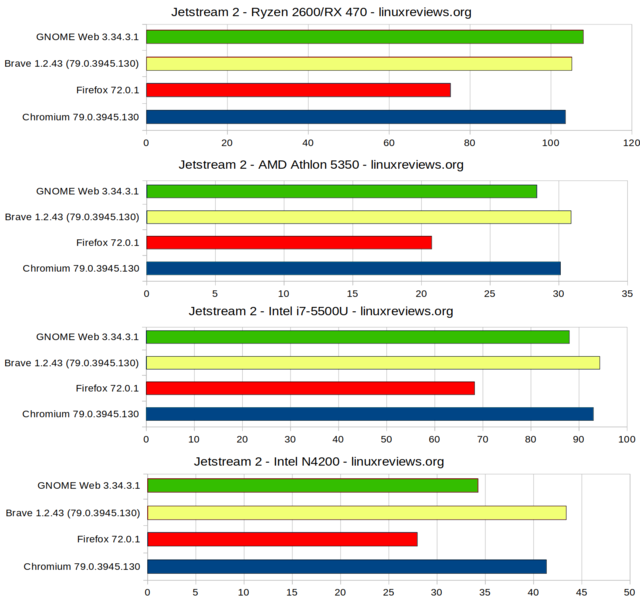 Brave, followed by Chromium and GNOME Web, are the winners in the synthetic JetStream test. Firefox, which is the only Gecko-based browser able to participate, is way behind on all the test systems.

Pale Moon and SeaMonkey win the Principled Technologies Webexprt 3 test yet they lag far hind Brave and Chromium in the rest of the tests. Brave and Chromium are clearly much faster at everything involving WebGL and WebAssembly. That is specially true if you have an older or weaker machine: Pale Moon, Firefox and SeaMonkey are all further behind on weaker hardware. Pale Moon supports WebGL, but it does not support WebAssembly, so it is not a choice if you visit sites using that technology.

Most web pages are not filled with a lot of WebGL or WebAssembly. They are filled with an increasing amount of garbage JavaScript doing tracking and other evil so JavaScript performance does matter. How much it matters is hard to say. Brave has built-in advertisement blocking. Chromium, Firefox and Pale Moon can use the Ublock Origin extension to block all kinds of web garbage, including JavaScript. JavaScript performance does not matter as much if you block most of it.

The Principled Technologies Webexprt 3 results shows that Pale Moon, SeaMonkey and Firefox can be faster than Brave and Chromium in some (simulated) scenarios. Why is unclear. It does seem like that benchmark tests html5 and JavaScript performance and nothing else which could mean that it gives a better indication of real-world casual web browsing performance.

There are, of course, a lot of factors beyond raw performance who do make a difference. Chromium is the only web browser with potential support for hardware accelerated video decoding on GNU/Linux. Fedora, Manjaro and a few other distributions build Chromium with a VAAPI patch-set. Type chrome://gpu into the URL bar and look for "Video Acceleration Information" to see if those patches are present or not.

It is hard to declare an absolute winner. Brave and Chromium, seem to be the overall winners but Pale Moon, SeaMonkey and Firefox are not bad choices if you never visit pages with fancy WebGL or WebAssembly ever. Chromium may be the best choice if you watch a lot of video on a laptop if your distributions Chromium package has the hardware video acceleration patches.

25 days ago
Score 0 You
Ungoogled Chromium has potential for those who want a completely Google-free browser. I wonder if its performance is negligible.

24 days ago
Score 0 You
"Ungoogled Chromium" is regular Chromium with a few extra patches on top so there should be no measurable difference in terms of performance. None of the privacy-related patches I've seen in "Ungoogled Chromium" style build trees do anything at all in terms of performance. They alter some hard-coded domains and that's about it.
Permalink
You are ignoring the author of this comment
Show comment | Manage ignore list

24 days ago
Score 0 You
Why is Pale Moon not at the latest version?

Pale Moon 28.6.0.1 is the latest version in the COPR repository linked at http://linux.palemoon.org/

The vast majority are not going to compile Pale Moon themselves. We could do that and test it but that wouldn't reflect what the majority of people get if they install it. If there was an AppImage of the latest version available then we would be fine with using that. There isn't.

I guess we could try the "unstable" version http://linux...ad/unstable/ which is named "Blood Moon" in addition to the stable version. Perhaps we'll do that next time.
Permalink
You are ignoring the author of this comment
Show comment | Manage ignore list

24 days ago
Score 0 You
Pale Moon supports WebAssembly, you have to enable on about:config.