Pleroma is a social network microblogging server built on the open OStatus and ActivityPub standards. Servers running the Pleroma server software can exchange messages and user posts with other servers following those standards. Pleroma differs from other ActivityPub-compatible software in it's efficiency, lower system resource-use and it has a lot fewer dependencies. 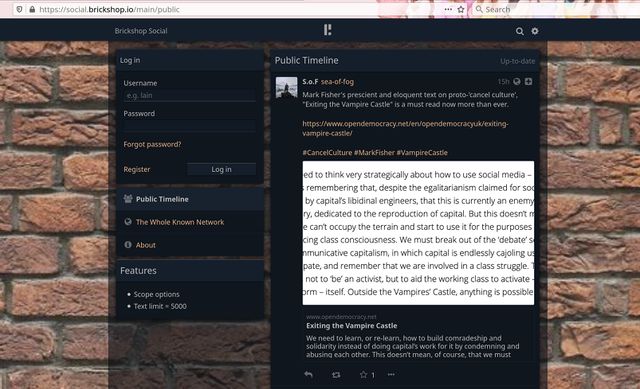 A social media server running Pleroma. Users on that server can interact with other users on servers running the open ActivityPub protocol.

The network of servers using the standard ActivityPub protocol are as a whole called the Fediverse. The Fediverse is, as a whole, a truly distributed version of centralized social media sites like Twitter and Parler.

Most of the Fediverse servers who take a pro free speech stance appear to be running Pleroma while those ran by very censorship-happy authoritarian administrations tend to use the Mastodon software. See the article Fediverse for a comparison of servers and their features.

A Pleroma server needs to have Elixir and PostgreSQL installed. And that's it. It is therefore fairly easy to install and setup compared to alternatives like Mastodon - which require NodeJS, Rails, Redis, Sidekiq and a range of other software which makes setup and maintenance a nightmare.

Pleroma comes with it's own web front-end called Pleroma-FE. It is also possible to use Soapbox as an alternative front-end on top of Pleroma.

plthemes.vulpes.one has a comprehensive gallery of downloadable Pleroma themes.

You can find some general information about Pleroma at blog.soykaf.com/post/what-is-pleroma/

Just found your site. Great review. You're article has been referenced but I won't tell you where :P