There are hundreds of Mastodon installations on the web, with varying terms, rules and policies, for those who want to join the decentralised social network fediverse without having to setup and run their own server. 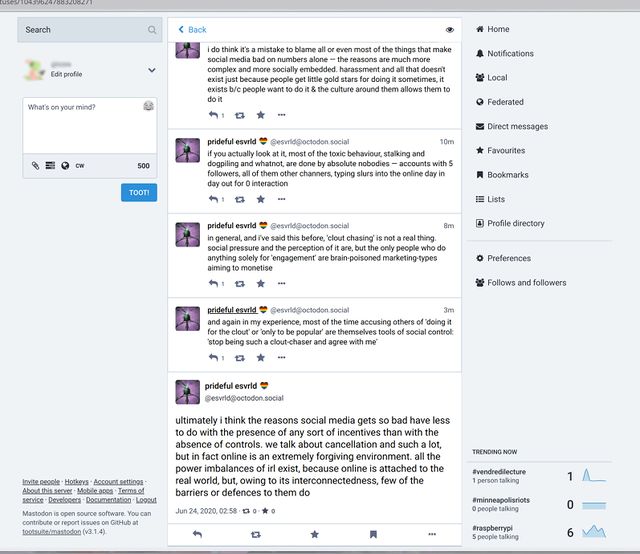 Users on a Mastodon server can post messages with message character limits between 500 and 1000 depending on how the administrator of the particular server configured it. Up to four images or a single audio or video file can be attached to each message. Messages can have "content warnings" that will, if set, show instead of the messages contents until the warning is expanded into the actual message. Posts by other users can be "boosted" into your own timeline.

Users can follow other users. Both local users on the same server and users on remote servers can be followed. Other users can be muted or blocked.

Themes are supported. A light and a dark theme are provided on a standard installation.

Message synchronization between Mastodon servers is somewhat inconsistent and to some degree random. Clicking on a remote user may or may not list some or none or all the messages that remote user has shared. All messages remote users post will only consistently show up if some on the local server you are using is following the remote user you are looking at. One bad result of the way the ActivityPub protocol works in practice is that a conversation involving many users will frequently look different depending on what server you are looking at. A original post may have 50 replies on the server where it was posted and appear to only have 5 replies when that same post is viewed on another server.

Mastodon has relatively high requirements both in terms of processing power and stack compared to the similar and more light-weight Pleroma social media server.

A working SMTP mail server is also required. Lots and lots of RAM is desired and to some degree required. Lots of storage space is also a good idea if you plan on catering to thousands of users.

The source code needed to install and run Mastodon is available at github.com/tootsuite/mastodon.

Sites running Mastodon and forks change the web browsers scrollbar to almost black on black if you use the dark theme. It is possible to fix that rather user-unfriendly design decision using a web browser plugin like Stylus and the following userstyle:

The Mastodon software can be acquired from github.com/tootsuite/mastodon.

There is extensive documentation at docs.joinmastodon.org.