Lumina 1.6 Is Released For Those Who Want A Sort-Of Really Light-Weight Desktop Environment

Lumina is a kind-of light-weight desktop environment written in C++ using Qt5. It has its own desktop program, file manager, text editor, HDR photo manipulator and media player. The Luminas desktops window management is handled by Fluxbox. The Lumina 1.6 release announcement says nothing about what is new in this release and the Lumina git log does not indicate much beyond minor code cleanups and fixes since the last release in April 2019. 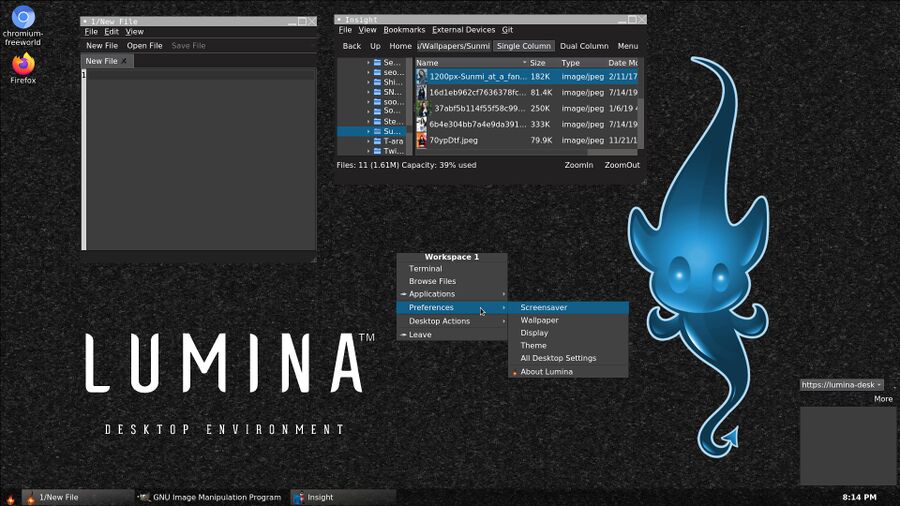 The default Lumina 1.6 desktop environment with its text editor and file manager.

Lumina is meant to be a simple and light-weight desktop environment and it is kind-of light weight. The desktop process has a low memory footprint and the Fluxbox window manager it uses (which can be used without the Lumina desktop) is really light-weight. However, Lumina is not that light when you use it. As an example, searching for something in the menu using the search feature is really sluggish with 30+ second delays where Lumina just freezes with lumina-desktop utilizing one CPU core at 100%. Checking [x] Show categories in the menu makes the desktop freeze for several minutes while the lumina-desktop process does who knows what using 100% on one CPU core. Some aspects of it are light. Opening the file manager or the media player, which does not actually play any media files, is near-instant.

The release notes for Lumina 1.6 do not say anything about what, if anything, is new in this release. A close-up inspection of the git commit log shows about 40 very small code commits since Lumina 1.5 was released late April, 2019. The vast majority of them are small and simple cleanups, fixes for compiler warnings and white space removal. A new Java syntax highlighting rule-set for the Lumina text editor appears to be the only commit with something new feature-wise.

Lumina 1.6 packages are available for Fedora (in updates-testing) and something called "Arch". There are no Ubuntu packages available. The source code for Lumina 1.6 can be acquired from the github releases page. It is just a small 20 MB download. It won't build on Ubuntu using the instructions indicated in the README.md so you will have to spend some time if you really want to try it.