AMD graphics cards and APUs are generally very well supported by GNU/Linux distributions. The avast majority will work fine out of the box. Some older AMD cards require special kernel parameters to enable features like Vulkan support. Screen tearing can be a problem in setups. That can problem be fixed using a X configuration file if it is an issue.

There are two kernel modules for AMD graphics cards: radeon and ampgpu. Very old cards can only use radeon, all newer cards should use amdgpu. Some older cards and APUs can use both but will not get some features depending on which is used. Hardware video decoding is not supported when using the amdgpu kernel module on GCN gen1 and gen2 cards (Radeon HD 77xx–7900 Series) but Vulkan is - but Vulkan is not supported when using the radeon kernel module on those cards.

User-space support for OpenGL and Vulkan are provided by the Mesa graphics library. The radeonsi driver provides OpenGL 4.6 support and the RADV driver provides Vulkan 1.2 support. There are two Xorg drivers available: radeon and amdgpu. Use the one which is named the same as the kernel module you are using (probably amdgpu unless it is a very old GPU or APU).

You will not have to care in the vast majority of cases, amdgpu is the right choice for all newer graphics cards and the kernel will choose that automatically. There are two generations of olders AMD graphics cards and APUs where amdgpu is optional and radeon is the default: "Southern Islands" and "Sea Islands".

Which you kernel prefer can be selected by using kernel boot parameters OR a module configuration file /etc/modprobe.d/amdgpu.conf

The x.org Feature Matrix for Free Radeon Drivers page has a list of code-names for AMD graphics chips.

Both the amdgpu[1] and the radeon[2] drivers support an option called TearFree. Add either of these configuration files to a /etc/X11/xorg.conf.d/ folder (will exist on most distributions but you have to created it on Ubuntu and a few others):

Mesa 20 has a ACO shader compiler for Vulkan which is faster than the default LLVM shader compiler. You can enable it by setting export RADV_PERFTEST=aco

Totally Messed Up Colors In Some Applications

Some software, primarily the Chromium web browser, has issues with 10-bit colors. Chromium will look all messed up if you enable 10-bit color: 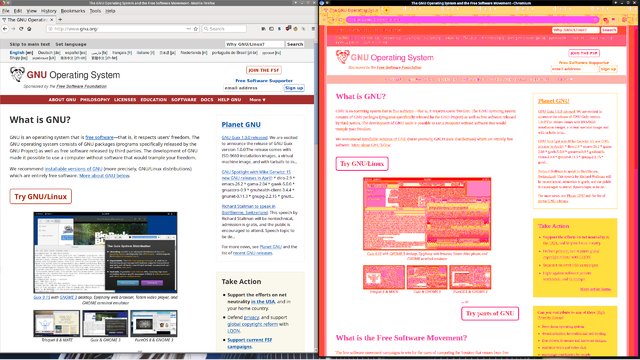 The Chromium browser on a desktop where 10-bit color is enabled. It is one of the few programs with this particular problem.

This is not only a problem if you enable 10-bit color on your desktop. It is also a problem with Chromium, and perhaps other software, if the Mesa version defaults to 10-bit color on certain GLX and EGL operations[3] (in later Mesa versions). This behavior makes Chromium show videos with all messed up colors[4] if the Chromium browser is built with VAAPI patches for hardware accelerated video playback and the video playback is using this feature. 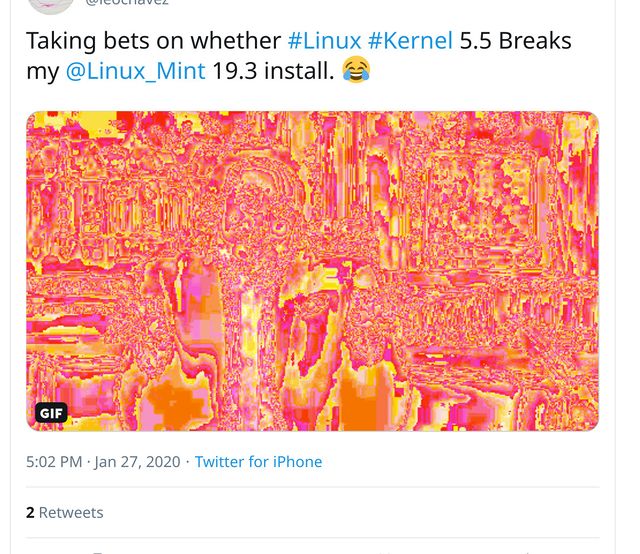 The above video playback problem can be solved by creating a $HOME/.drirc file with the following contents:

You can, alternatively, put that in a file in /usr/share/drirc.d to make it system-wide.