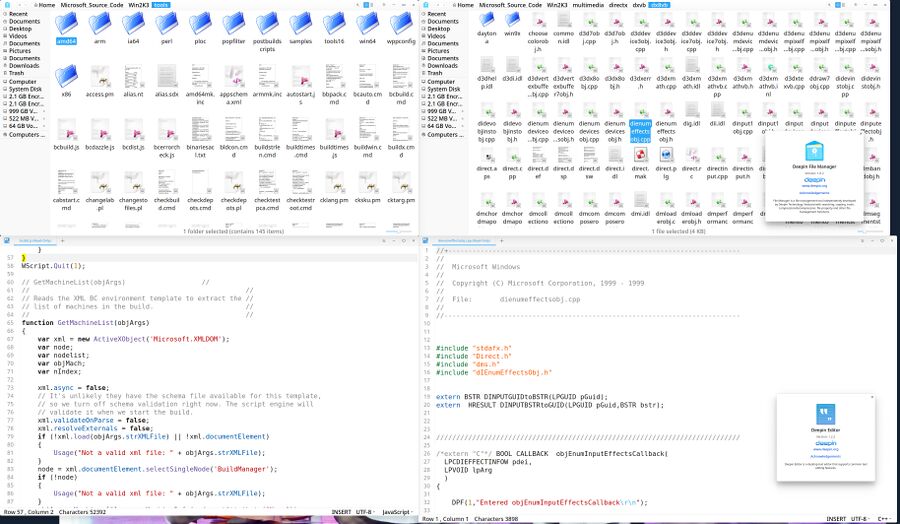 Today's mother-lode of all source code leaks does not appear to be officially endorsed by Microsoft even though all the code is all old enough to be released into the public domain with zero impact on Microsoft's bottom line. The massive 42.9 GiB torrent leak contains compressed source code for most of the operating systems released by Microsoft between 1987 and 2001.

Those who want to study ancient Microsoft code for historical research purposes can now have a look at:

There's also some media files and things like that in the "Microsoft leaked source code archive_2020-09-24" folder.

It is important to understand that this leak does not make any Microsoft code free software. All the leaked files remain immoral proprietary software, unusable to anyone with a semblance of a moral compass, even though the source is out there. Microsoft has not granted anyone the right to use this source code for any purpose, so free software projects that could have benefited from this source to some degree, like Wine and ReactOS, can't use it. Those who are working on re-implementing Windows APIs shouldn't even look at it.

Perhaps Microsoft will decide that Windows XP is so old that they might as well release it under some free software license now that its source code is readily available all over the Internet. It's not like they would lose a single sale if they do, none of the operating systems in the leak have any kind of official support. Not that it really matters, the Linux kernel is decades ahead of anything Microsoft has, old or new, so the leaked source code is mostly interesting for those who want to do historical research.

We'll leave you with a few very touching stories:

..and one question worth pondering: Did Richard Stallman and the Free Software Foundation give Microsoft permission to use GNU General Public Licensed code in Windows XP and Windows Server 2003?

Microsoft has not given anyone permission to download these possibly stolen source code files. It may therefore be illegal to acquire them using this magnetic link: magnet:?xt=urn:btih:3d8b16242b56a3aafb8da7b5fc83ef993ebcf35b

We do understand if you would want a copy. For historical research purposes only, of course.

That's a silly request. It would be irresponsible to release such obsolete software with known security vulnerabilities if they aren't going to maintain it.

25 days ago
Score 0
That makes absolutely no sense, they obviously wouldn't be releasing it with the intention people use it so the vulnerabilities would not matter
Permalink
You are ignoring the author of this comment
Show comment | Manage ignore list

6 months ago
Score 0
Thank you so much Dsousa :)

4 months ago
Score 0
thanks Dsousa!